Down by an early Jamal Ibrahim goal, as early as the 9th minute, India came back strongly to hold UAE 1-1 in the Under-22 AFC Championship at the Royal Oman Police Stadium in Muscat. After a barrage of attacks on the rival citadel, Romeo Fernandes restored parity in the 88th minute.

The early goal conceded may have been an initial setback but it didn't un-nerve India. Rather, they stayed content in building up from back; so much so that the first 20 minutes earned them three corners. The number increased to seven by the 40th minute. 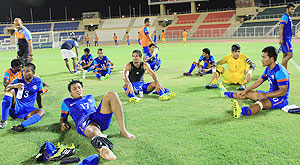 In the midfield, it was all about the workload. Be it a robust Manandeep Singh or be it an intelligent Lalrindika Ralte or an irrepressible Milan Singh or a tireless Pranay Halder, the Indians pressed hard all throughout. The first half yielded seven corners and a handball shout was ruled out in the 40th minute inside the UAE penalty box.

Changing over, it UAE defended all throughout -- not a strategy but were forced back. They tried to change the combination a number of times, but it failed. Romeo's fresh legs on the right stretched them and in the 51st minute, Tirthankar Sarkar missed heading into an empty second post, the ball agonisingly missing.

Jeje replaced Tirthankar in the 69th minute and within two minutes, his free header off a Milan Singh corner just sailed over. UAE were surviving dangerously.

Eventually Romeo headed home in the 88th minute following a Vishal Kumar throw-in down the right. A minute later, Romeo had the best chance of the day when he sneaked in between the wall on the left, ran all the way into the 6-yard box but rival goalkeeper's legs came in between.

India next play Turkmenistan on June 30. 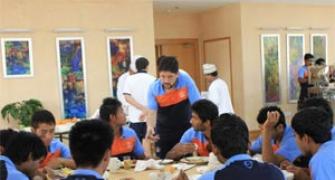 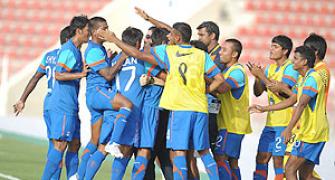 India breeze past Lebanon in AFC Under-22