India striker SV Sunil will face a disciplinary action for raising his middle finger at the spectators after scoring the winning goal against Pakistan in the Azlan Shah Cup match.

Sunil's gesture caught the attention of the tournament director after television replays showed the striker celebrating his 69th minute goal, which sealed the match 2-1 in India's favour, by throwing a punch in the air with one finger raised as he got off the turf and ran back.

The incident did not come to the notice of officials immediately but slow motion replays of the goal were discussed last night by television commentators. 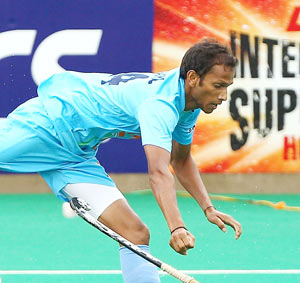 The Tournament Director Sarinder Dillon of Hong Kong has summoned the Indian team manager on Saturday before the last round of the round-robin league matches that begin after a day's rest.

Dillon said he had seen the video but would not talk about the subject only after meeting the Indian manager.

"I have seen the match's video and I'll meet the Indian team manager tomorrow regarding the incident," Dillon said, refusing to elaborate if any disciplinary action would be taken on Sunil.

Other tournament officials said any action against the errant player would first be intimated to the team concerned before it is announced.

The Indian squad seemed oblivious of the developments even as the Tournament Director was announcing the decision of summoning the team's manager.

Indian team coach Michael Nobbs, who gave the players a day off after finishing their six league matches, said he was going to see the match recording and the incident that was being mentioned.

"We saw nothing, and it would be out of character for Sunil to do something like that," Nobbs said.

Sunil's match-winning goal for India against Pakistan came in the penultimate minute of the game when the teams were tied 1-1.

India had opened the scoring in the first session through penalty corner specialist Sandeep Singh, while Pakistan equalised with a penalty corner conversion by Sohail Abbas, the highest all-time goal scorer in international hockey.

The victory has kept the five-time champions India, currently lying in the third place, in the contest for a bronze medal.

India's opponents for the play-offs and whether that would feature in the bronze medal match would be finalised only after Saturday's league matches.

All teams, expect India, will be playing their last league games.

India have rounded off their league engagements with nine points from six matches.

Argentina (nine points from five matches) and pre-tournament favourites Great Britain (eight points in five matches) are vying for the second spot when they go into their respective last league matches.

We deserved victory over Pakistan: Nobbs