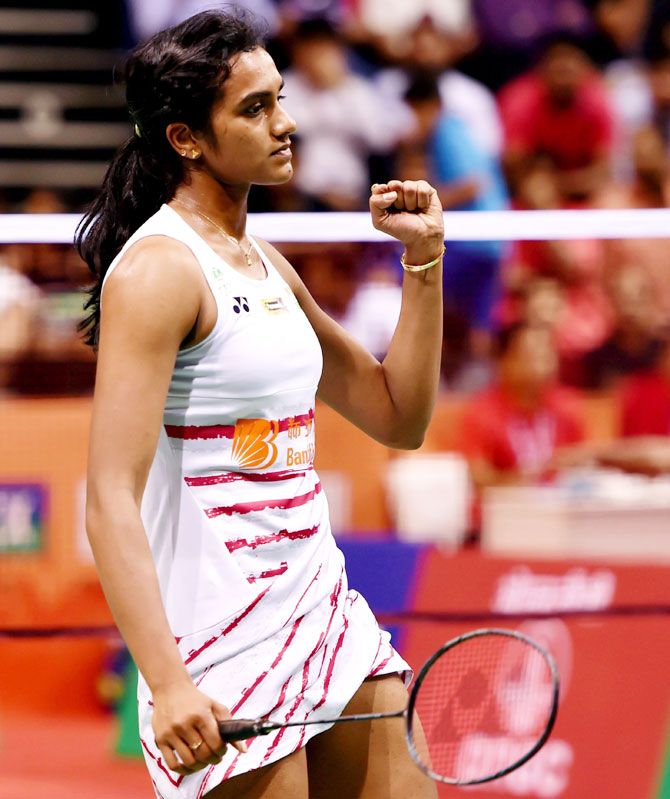 IMAGE: India's PV Sindhu celebrates a point during during her match against Japan's Kawakami Saena during the Women's singles match at the Yonex Sunrise India Open 2017 in New Delhi on Thursday. Photograph: Vijay Verma/PTI

London Olympics bronze medallist Saina, who had struggled past Pornpawee Chochuwong in the finals of Malaysia Masters in January, brushed aside the 19-year-old Thai 21-14, 21-12 in a lop-sided women's singles contest.

Rio Olympics silver medallist Sindhu then staved off the challenge of Japan's Saena Kawakami winning 21-16, 23-21 to set up a quarter-final clash against world no. 8 Saina on Friday.

Earlier, Sameer Verma continued his rampaging run, notching up another stunning win over higher-ranked Hun Yu of Hong Kong in straight games to emerge as the lone Indian hope in men's singles competition.

The Hong Kong Open finalist, Sameer reached the quarter-finals with a shocking 21-17, 21-15 win in a 40-minute match. The 22-year-old from Dhar, who had clinched his maiden

Saina and Sindhu have met just once in an international competition -- at the 2014 Syed Modi International. Saina had won that match in straight games. They had played against each other in PBL early this year with Sindhu having an upper hand this year.

"Anything can happen tomorrow in this fast court where attacking is difficult, and also playing a rally game is also tough. It is very difficult to control the shuttles," Saina said.

"She is a top 10 player and it will be very tough to control the shuttle. I will have to control my errors, I just hope I play better than today. But I have nothing to lose and it is lot easier to play without pressure. In PBL, it was 11-point and I was not even sure if I would be playing as I was coming out of injury."

Olympic champion Carolina Marin of Spain also reached the quarterfinals at the expense of India's national champion Rituparna Das, who went down 13-21, 11-21 in a one-sided contest.

A relaxed Saina played well within herself, analysing her mistakes, and often breaking into a smile. The Indian was not challenged much by World No. 34 Pornpawee as Saina always had the upper hand in the 33-minute match.

Instead of going for the kill, Saina waited for her opponent to make mistakes and eventually grabbed the opening game when Pornpawee hit long twice.

The second game started on a competitive note with some fast rallies but Saina soon stepped up and created a gap which her rival could not narrow down.

World No. 5 Sindhu, on the other hand, had to toil hard in the second game against an opponent who was agile and showed tremendous tenacity. However, in the end, it was a return that kissed the net and fall sharply at the forecourt which left the Japanese sprawled on the court.

Talking about her quarter-final clash on Friday, Sindhu said: "I know everybody would be looking forward to the match (against Saina) and hope the best player wins tomorrow." 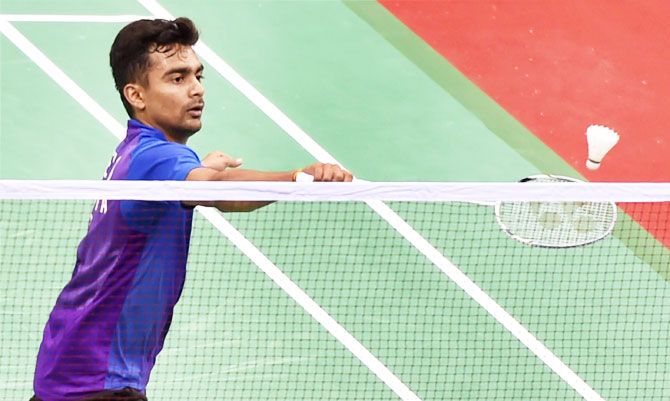 After making his maiden quarter-finals at India Open, Sameer said: "I had prepared for his game but he played better today. He is a tricky player with quality strokes. I think I am confident enough to go for my strokes. I will look to continue the momentum tomorrow."

The older of the Verma brothers, Sourabh was engaged in a fierce battle with another Hong Kong shuttler when Sameer took the court and while he completed his victory with consummate ease, Sourabh blew a 19-16 lead in the decider, despite making a roaring comeback in the second game where he had led from start to finish.

While answering about the difference between their games, Sameer made an observation, saying: "He has a calm head and has a good rally game while I am more attacking, perhaps, if I can have his patience and he can have my aggression, we both will do well."

Before the Verma brothers could finish their engagements, another Indian was facing an exceptionally unsual day where nothing seemed to go his way.

Former champion Kidambi Srikanth had such an off day that he completely misjudged the length of the shuttle and struggled with his strokes and got buried in a heap of unforced errors. After 25 minutes, Rio Olympics bronze medallist Viktor Axelsen ended his agony with a 21-7, 21-12 win.

"Nothing went my way today. I was misjudging the shuttle completely. He was playing too well and I just couldn't’t compete," Srikanth said.

Among others, B Sai Praneeth failed to match the seventh seeded Chou Tien Chen of Chinese Taipei and was outclassed 14-21, 16-21 in 36 minutes.