Skipper Sunil Chhetri struck twice to help Bengaluru FC beat Shillong Lajong 2-1 in a thrilling 12th round match of the Airtel I-League in Bangalore on Sunday. 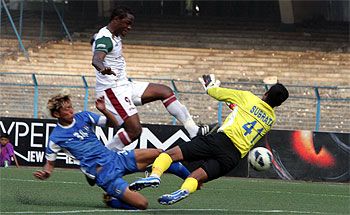 With this win at the Bangalore Football Stadium, Bengaluru FC kept their unbeaten record at home intact while Shillong Lajong's six-match unbeaten run in the league came to an end.

Bengaluru FC now have 21 points from 11 matches, while the North Eastern side remain on 14 points.

Man of the match, Chhetri opened the scoring for his team in the seventh minute. After a smart move from the left flank, he managed to put the ball past the Lajong keeper Vinay Singh after a perfect one-two with Robin Singh.

The second goal came from a penalty in the 34th minute after Chhetri was brought down inside the box by Robin Gurung. Chhetri made no mistake from the spot, as he became the highest Indian goal-scorer in the league with four strikes.

The visitors pulled one back in the 81st minute with a brilliant goal from Boithang Haokip. Haokip's curling left footer from a free kick outside the box beat Bengaluru FC keeper Pawan Kumar. The home side managed to cling on to the one goal lead to pocket full points from the match.

Mohun Bagan 2-0 in the 12th Round of the I-League at the SaltLake Stadium in Kolkata on Sunday.

Manandeep Singh gave 'The Blues' a lead against the run-of-play in the 22nd minute before Eugeneson Lyngdoh scored the second in the 66th minute to ensure the historic win.

Coming in following the back-to-back draws after strengthening their squad, the Meghalaya side was confident of upsetting the Mariners as coach Santosh Kashyap made some surprising changes.

He dropped youngster K C David Ngaihte and Joy Chandra, perhaps in a calculated move, to master a sweet revenge against the club that sacked him mid-way last year.

Ogba Kalu's first-half strike guided Sporting Clube de Goa to a solitary goal win against Salgaocar to move atop the table in Airtel I-League tie, played at Duler Stadium in Mapusa on Sunday.

Sporting scored the all-important goal in the 23rd minute when a build-up between Arturo Garcia and Karpeh saw the latter releasing the ball to Ogba Kalu, who made amends for his earlier lapse beating Karanjit Singh to find the far post. The win took Sporting Clube de Goa to 18 points from

11 matches, the same as Salgaocar, Pune FC and Bengaluru FC to find themselves at the top of the chart. 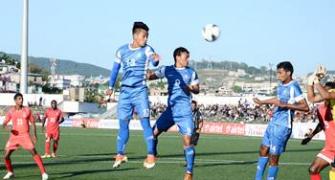 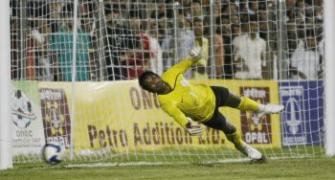 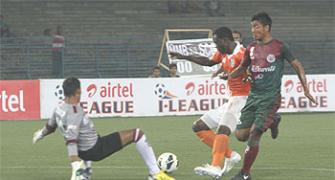 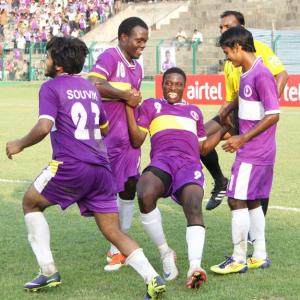 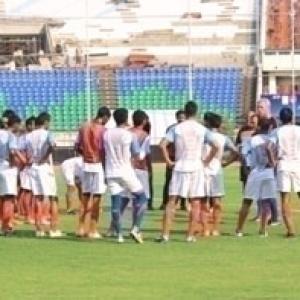