Viren Rasquinha is 22 and plays hockey for India. There may be many who have not heard the name before. But the fact is that the Mumbai youngster has carved a niche for himself as the best man-to-man marker in the Indian side. Important, decisive tackles earned him international acclaim during the Champions Trophy last month, in which India finished fourth.

A cool customer on the field, Rasquinha dreams of winning a medal at the Olympics. The Champions Trophy loss to Pakistan was disappointing, he says, but like the rest of the side he is looking forward to a better future.

The talented midfielder spoke to Ashish Magotra about the changing face of Indian hockey.

Comparing your time with the junior India team and now with the seniors, how different is the brand of hockey played?

I made my debut with the junior team in 1999 and C R Kumar was the coach for a couple of years. He taught us a lot and changed the way we used to play the game and the way we looked at things. I think the entire junior lot is a fantastic bunch, and hugely talented. We just have to give ourselves some time and gain experience before we start producing results. We need the support, the backing, the coaching; there is huge potential in this team.

As someone who grew up in the era of television, you have seen how the Europeans have completely taken over the game. Should India should stick to its unique brand of Asian hockey?

I think what is needed is a mix of both styles. The Europeans have perfected their basics. Right from hitting, trapping, scooping and slapping, which is the most modern facet of the game, all are perfect. Unfortunately, in India, because of a lack of Astroturf grounds, we have not been able to master the basics. We only get a chance to play on Astroturf regularly once we start playing for India.

Right from the begininning, Indians have played a very skilful brand of hockey. That is one area where we can beat the Europeans. The Pakistanis even today beat the Europeans on their brilliant skill. Skilful hockey is not something we should neglect.

The Europeans will dominate us in fitness and body play. In fact, these are our weaknesses right now; that is what we need to work on. They are better than us; let's be clear about that. We should not be afraid to dodge, but it needs to be done at the right time.

A new fitness culture is starting to develop...

Hockey has become a total power game; it has become a speed game and, as you can see, fitness levels have to be really high to survive in modern hockey. Teams like Australia and South Korea are beating teams like India and Pakistan only because of the pace they play at. Hockey today is a young man's game only because of the fitness levels required. The team needs a lot of strength and endurance training.

The Indian team is playing for almost seven or eight months a year and fitness tests are conducted regularly. The fitness levels are getting up right there with the best, though there is always scope for improvement.

As a man-to-man marker you are almost like a leech. You bend very low while tackling and the risk of injury is high. What goes through your mind then?

You should not be worried about getting injured, and that's the last thing on my mind. The low-bending is something that I have tried to pick up from the Europeans; their way of tackling. It has helped to improve my flat-stick tackling, which is required on turf. So I try to maintain a low centre of gravity. Right now I am working on improving my speed, strength and the ability to initiate counterattacks.

What is the relationship between the juniors and veterans, like Dhanraj Pillay and Baljit Singh Dhillon? Is it one of awe and respect or do you guys now think of them as other team members?

It is fantastic that Dhanraj is still playing in the team and at such a high level too. We have all grown up seeing him play for so many years and today we are playing alongside him. He is the only guy from the previous generation who is still around.

Most of the players have been around for a few years, so, I think, we are past that period of awe. Dhanraj is doing a good job as skipper and he leads from the front. Now he is more a playmaker, not the out-and-out striker he started off as.

At times, Dhanraj flares up on the field. How do the juniors react to that?

I think it is good to have a temper sometimes. It helps you remove your frustrations on the field, but it is also important to have a cool head at all times. I think it's just the way he plays. He sets a very high standard and expects everyone to maintain that same standard.

Just as Jugraj Singh and Dilip Tirkey are our penalty-corner specialists, you specialise in defending from penalty-corners. What's on your mind while charging out?

Obviously, when Sohail Abbas and the other specialists are flicking and the ball is whizzing past your head, you can get a little unnerved at times. But, as I said, when you are playing for your country the only thing you are thinking about is how to keep the ball out of the goal. If something has to happen, it will happen!

It's always the goalscorers who grab the headlines. What made you decide on becoming a defender?

I realised I was a good defender; my positioning is good and so is my tackling. Defending is certainly not a glamorous job but someone has to get the job done for the country. I enjoy my role. A forward has many chances to score and even if he scores just once his name will be in the newspapers. But if a defender makes one mistake and the ball ends up in the goal, he will get gaalis [abuse].

This team seems to have great team spirit, they stand up for each other. Have you experienced the feeling?

We were playing against Australia 'A' in Sydney, the score was 2-1, and it was almost the end of the match. As usual, the opposition was pressurising us and I made a silly mistake, which resulted in a penalty corner. It was the end of the match and all the players were abusing me for the mistake. But Jugraj and Ignace [Tirkey] and all the other guys involved in the short corner said, 'Come on Viren, we will save the short corner for you.' That made me realise that we are all together even in tough times. 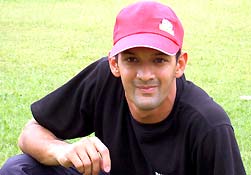 India seems to be a very switch on-switch off team. Something seems to be lacking. What do you think is the missing piece in the puzzle?

I wouldn't say we lack exposure. We have been playing for a couple of years and we could not ask for more. I think we need to take the mental aspect into account. Mentally, we need to be stronger, especially when we are a few goals up towards the end. Another thing that needs to be looked into is the change in strategy. As and when things are not going according to plan we need to have more options.

I think what we did wrong in this Champions Trophy is that we were not as sharp as we normally are. There were too many wrong passes, the man-to-man marking was very loose. Even the forward line needs to have more penetration and force more short corners. I think, at times, there was a lack of communication.

We basically need 16 players in the team, not 11; we need more depth. Rolling substitutions need to be the rule, not the exception. It is not physically possible to maintain the same pace, the same tempo, for the entire match.

I think in the third-place match, Pakistan got around seven or eight corners while we did not get a single one, which is a huge statistic, considering that we have specialists like Jugraj and Tirkey in the team. I think that was the difference between the two teams that day.

But it is a very talented bunch. For all the flaws we have, we also have a lot of good points and we have to make the best of what we have.

Any hockey player you have idolised?

Never idolised anyone; my favourites keep changing. Dhanraj and Mukesh Kumar were very good. Shahbaz Ahmed [Pakistan] was the greatest. Floris [Jan] Bovelander [of the Netherlands] was fantastic in his penalty-corner conversions.

Among the present players, I like Brent Livermore [Australia]. Teun De Nooijer [the Netherlands], who earned the player of the tournament award at the Champions Trophy, is the best player in the world at present.