The Indian hockey team received a confidence boost on Friday from none other than President A P J Abdul Kalam, who expressed hope that the team would win a medal in the Athens Olympics next year.

For the first time in five years, a head of state interacted freely with the hockey team. His words had an immediate effect on the players who promised that they would do their best. 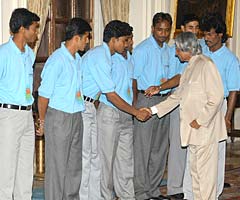 Mixing freely in his inimitable style, Kalam struck an immediate rapport with the team members who were overwhelmed by the President's gesture to ask each one of them to share their feelings.

"Hockey is a very famous game. In the last decade it has declined but this team is taking it up in a big way," Kalam, dressed in a beige suit, said.

Captain Dhanraj Pillay responded to the faith shown in the hockey team by the President saying, "I am overwhelmed. What else can I say if the country's President is hoping for a medal from us. It is a big morale-booster."

Pillay said this time he is really charged up for the upcoming Champions Trophy and the Athens Olympics because he has a very good team.

"In my entire 14-year career it is the best team that India has had. God has given me one more opportunity to realise my dreams of winning the Champions Trophy and an Olympic medal.

"The team has many players from the junior side that won the World Cup besides five-six experienced players. With this team, I am sure we will at least make it to the semi-finals of the Champions Trophy," he said.

All the players that were part of the double-leg Australian tournament and the Germany outing were sporting Sahara colours and looked in buoyant mood.

Pillay drew the attention of the President to the fact that the country had very few synthetic turfs with floodlights.

"When we go abroad we have to play under floodlights. We must have at least four such facilities in each state so that we can get enough practice of playing under these conditions," the 35-year-old mercurial striker said.

He was also all praise for Pillay, saying: "He is an inspirational leader. In fact, he has all the qualities of a good captain. He is experienced and the team looks up to him."

Tirkey said the team will work on penalty-corner conversions and also try to make the defence stronger so as not to concede last-minute goals.

Gagan Ajit Singh, named the player of the tournament in Germany, admitted that he had raised the bar for himself and will have to work harder to "maintain the rhythm that I had struck in Germany".

"The coach and the captain are all expecting me to do well in Champions trophy and I will try to do my best," he said.

Also read: Not Champions stuff yet