India crashed to their second defeat in the men’s hockey World Cup by conceding a late goal yet again to go down 1-2 against England at the Kyocera Stadium in The Hague on Monday. 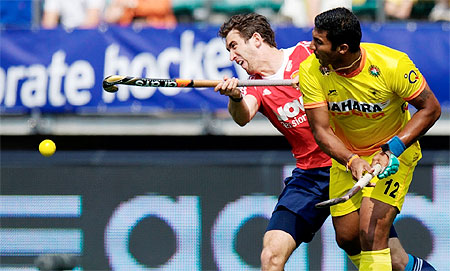 India had an equal run of play against England, and even saw a penalty stroke being cancelled out, paving the way for England’s victory.

Ashley Jackson’s penalty corner shot was blocked by goalkeeper P.R. Sreejesh, but Mantell capitalised on the rebound by sending a diagonal reverse shot into the net to leave the Indian players crestfallen in the dying moments of the game.

India had lost their opening game against Belgium 2-3 after conceding a goal with seconds left to the final hooter.

Australia, who earlier on Monday defeated Spain 3-0, are at the top of the table in Group A with six points from two successive wins against Malaysia and Spain.

After being held to a 1-1 draw in their first game by Spain, England now have four points from two matches.

India were dominant at the start and forced their first penalty corner in the 11th minute, when the ball was carried by a England defender inside the circle. The foul was not noticed by the umpire, but India made a referral and the foul was confirmed. It led to penalty corners being awarded twice over before India wasted the opportunity as the push was not well stopped and Manpreet’s attempt to continue the attack saw the ball soar over the cross-bar.

India mounted another move on the counter, but Akashdeep Singh made a hash of Dharamvir’s cross in the 20th minute.

At the other end, Indian goalkeeper Sreejesh padded away a shot from Dan Fox.

India then came close to scoring in the 23rd minute on another Dharamvir cross to Mandeep Singh, but he sent the cross high in haste.

An unnecessary obstruction on the 25-yard line by Yuvraj Walmiki gave England their first penalty corner, which was converted by Mark Gleghorne with a rising shot.

Image: Action from the Hockey World Cup match played between India and England on Monday 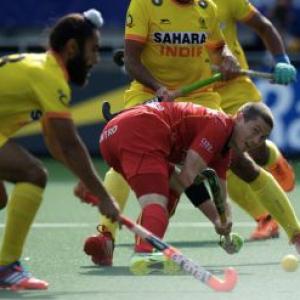 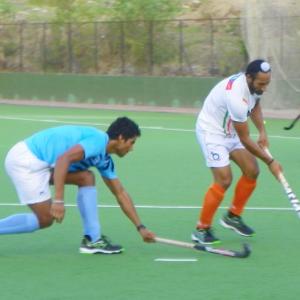