India edged out arch-rivals Pakistan 3-2 in the final of the Asian Champions Trophy Hockey tournament to lift the title for the second time. 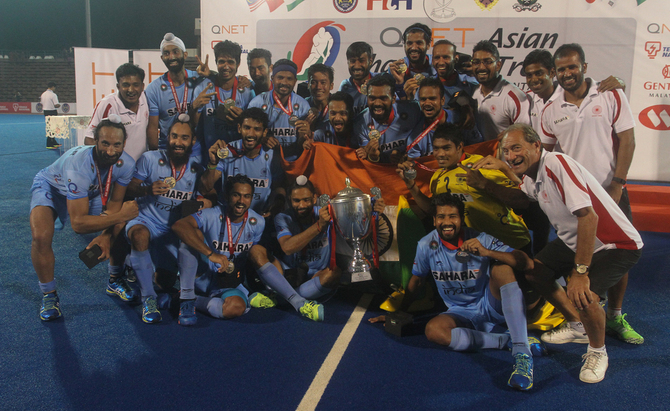 IMAGE: Indian team pose with the trophy after beating Pakistan in the final on Sunday. Photograph: Hockey India.

Favourites India prevailed 3-2 over arch-rivals Pakistan to reclaim the Asian Champions Trophy hockey, presenting a perfect Diwali gift to the nation in Kuantan, Malaysia on Sunday.

Goals from Rupinder Pal Singh (18th minute), Yousuf Affan (23rd) and Nikkin Thimmaiah (51st) helped India surmount the challenge from Pakistan, who rallied from two goals behind through strikes by Muhammad Aleem Bilal (26th) and Ali Shaan (38th) in the title clash of the fourth edition of tournament.

This was the first time the teams were meeting in the final of a continental tournament since India dethroned Pakistan as the Asian Games champions in Incheon, South Korea in 2014.

India had won the inaugural edition of the Asian Champions Trophy by defeating Pakistan in the final in 2011.

Pakistan reversed the result in the title contest the next year and went on to retain it in 2013 by defeating Japan in the final.

World No. 6 India were the favourites going into the tournament, but were without several seasoned players who had been rested to recuperate from injuries.

India went into the title contest at the Kuantan Hockey Stadium without ace custodian PR Sreejesh, who was rested due to pulled hamstring and Akash Chikte took the position under the bar.

India earned their first penalty corner in the seventh minute, but failed to make it count. Ace flicker Rupinder was on the spot, but Jasjit Singh Kular was allowed to take the shot in a tactical move. Jasjit's shot went wide of the left and posed no threat.

Pakistan had a chance to take the lead in the 12th minute when Muhammad Rizwan Jr picked up a long ball inside the Indian circle and had only the goalkeeper to beat from close range. Goalkeeper Chikte stepped up to tackle him from close and Rizwan Jr shot wide to muff the opportunity.

A cross from the right sailed across the Pakistan goal in the 11th minute without the Indian strikers being able to connect, while at the other end Muhammad Arslan Qadir's shy from a narrow angle was padded away by the Indian goalkeeper as the first quarter came to an end. Three minutes later, Nikkin Thimmaiah relayed a ball from Sardar Singh to Talwinder Singh on the left. Talwinder could not control his reverse drive and the ball went soaring over the cross-bar

Seasoned Indian midfielder Sardar Singh was again in the picture as India increased the lead in the 23rd minute as he worked up on the right flank and put Ramandeep Singh in possession on top of the circle.

Ramandeep's cross was deflected in by Yousuf Affan into the boards to put India 2-0 up.

Under pressure, Pakistan responded by forcing their first penalty corner, which was converted by Muhammad Aleem Bilal in the 26th minute. Bilal sounded the boards with a low drag-flick that beat the goalkeeper.

Pakistan defence had no trouble in warding away India's attempts to send long diagonal balls into the circle and capitalised on a lapse by the Indian defence to draw 2-2 parity in the 38th minute. Ali Shan wasted no time in slapping the ball that had got deflected to him inside the scoring zone.

India had a goal disallowed on review in the 40th minute when the video umpire ruled that Kothajit Singh's shot from outside the circle went into the goal without a touch.

India wrested the lead back in the 51st minute when Sardar again shaped the goal-bearing move by working his way up on the left flank and gave a through pass to Thimmaiah, who beat Pakistan custodian Fareed Ahmed with a diagonal flick that ended inside the right goal-post.

Pakistan forced their second penalty corner in the 53rd minute, but the opportunity went abegging as the push could not be stopped.

In the final two minutes of play, all Indian players fell back into their territory to keep the last-gasp Pakistan attacks at bay. 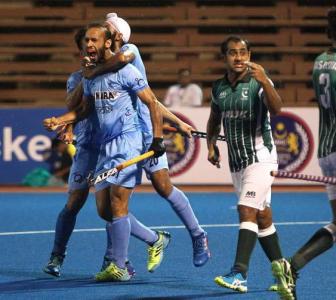 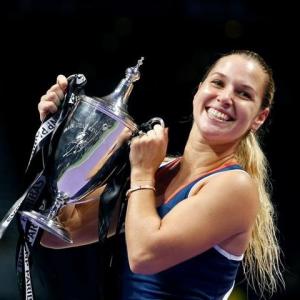 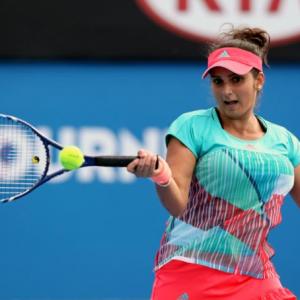