Croatian giant Ivo Karlovic conjured up a magical performance on Monday to rewrite Wimbledon history by beating champion and top seed Lleyton Hewitt in the opening round of the grasscourt Grand Slam.

Only once before in the tournament's 126-year history, had a champion lost in the opening round. That was in 1967 when Manuel Santana lost to Charlie Pasarell. 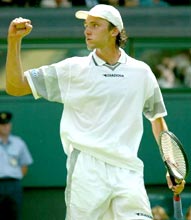 Nobody could have predicted 24-year-old Karlovic's extraordinary victory, coming as it did in his first-ever Grand Slam match. Not only that, but this was just his 11th career match at full Tour level.

But the lumbering Croatian recovered from the loss of a 19-minute first set to blast 18 aces past the world number two and secure the astonishing victory in two hours 24 minutes.

That Karlovic had even qualified for Wimbledon was surprise enough. He had previously failed to qualify for 10 grand slam tournaments.

Finally, though, he managed last week to string together three qualifying wins to reach only the fifth tour-level tournament of his career.

His record as a professional tennis player was four victories and six defeats. Hewitt's by contrast was 285 wins for 89 defeats.

Hewitt has won two Grand Slams and $11.5 million. Karlovic has scraped together just $155,772 in three years hacking round the circuit.

The gulf in class should have been immense but Karlovic breached it with a giant stride to burn his name into the Wimbledon record books.

For 19 minutes of the Centre Court clash, it had looked as though Karlovic would be lucky to win a handful of games and leave with his modest pride intact.

But once he found his feet and settled on the verdant stage he threw all he had at Hewitt and it was too much for the Australian to handle.

Karlovic squeezed through the second set on a tiebreak, whipping a crosscourt forehand past Hewitt to clinch the set before romping through the third in a little over half-an-hour.

The pair inched through the fourth set and still Karlovic's nerve held as Hewitt, closely cropped and cap-free for the occasion, awoke to the horror of the situation he was in.

Swinging freely, the Croatian challenged every Hewitt serve while holding his own comfortably, crashing it down from such a lofty height.

The heart-stopping break came in the ninth game of the set when Hewitt shovelled a backhand long.

A few moments later Karlovic was shaking hands at the net and savouring a magical sporting moment.