When Dipa Karmakar launches into her soaring vault at the world championships, chances are that none of her rivals will be aware that the foundations of the skill were built on makeshift apparatus made by stacking several crash mats on top of each other.

On Saturday, the 22-year-old gymnast will get a chance to show to the world just how far she has come since her rather primitive start in the sport when she attempts a daring Produnova vault.

It is a skill so difficult - consisting of a front handspring and two front somersaults - that Karmakar is one of only five women to have landed it in competition.

But as the first Indian to qualify for an apparatus final at a global championships, Karmakar knows she has to pull off something spectacular if she wants the world to take notice.

"My coach (Bisweshwar Nandi) was frightened when I first started doing the vault because he thought I could break my neck or end up dead but I was eager to try and push the boundaries," Karmakar, who hails from Agartala, told Reuters in an interview in her native Bengali.

"Sir (Nandi) even got a telling off from the team's foreign coach for allowing me to perform this vault because it was too risky. But my coach and I felt we had to take some risks if we wanted to compete with the best." 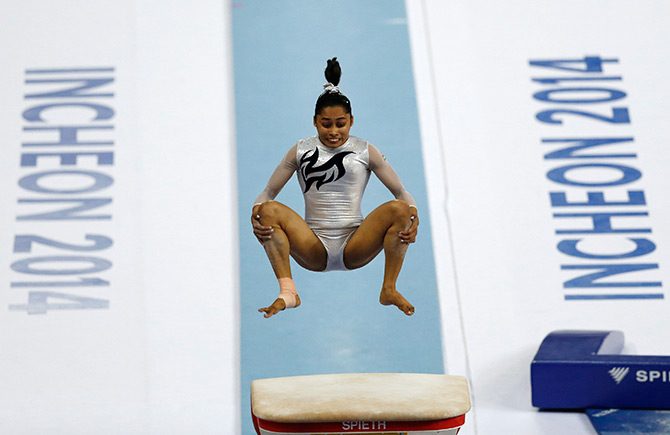 Such has been her dedication in perfecting the skill, that she decided to note down her attempts for one week in a diary she keeps. The final tally? -- 127 vaults.

But then again, Biles had access to top-of-the-range apparatus from the start and did not have to face the hardships Karmakar has had to overcome.

"There are barely any world class gymnastics facilities in the whole of India so in a small city like Agartala there was practically nothing," said Karmakar, who was introduced to the sport by her father.

"There were some locally made uneven bars in my small gym but they were the wrong size and looked nothing like the ones you see here in Glasgow. 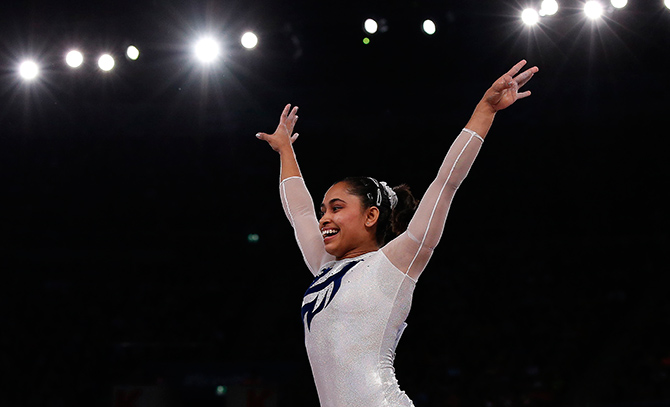 "I had to put together several narrow rectangular judo mats to make an area to practice the floor exercise.

"And there was nothing that resembled a vault so we piled many crash mats on top of each other to make some sort of a raised platform up to 1.25 metres from where I could launch into a vault which probably wasn't safe but it was the only option available to us.

"So I feel that to get here and make an apparatus final, especially after the unbelievable challenges I faced in India, is a really big deal."

Success at last year's Commonwealth Games, when Karmakar claimed a bronze on the vault in the same Hyrdro Arena that is staging this week's championships, has done little to change her fortunes.

With next to no funding available for a sport that gets barely any attention in India, Karmakar still has to make do with practising her skills on out-of-date apparatus.

When Delhi hosted the 2010 Commonwealth Games, equipment manufacturer Gymnova gave her the cast offs from that competition. Those are the apparatus she still uses even though the world of gymnastics has moved on to more high-tech gear.

Being forced to play catch-up every time she turns up at an international meet can be extremely frustrating. 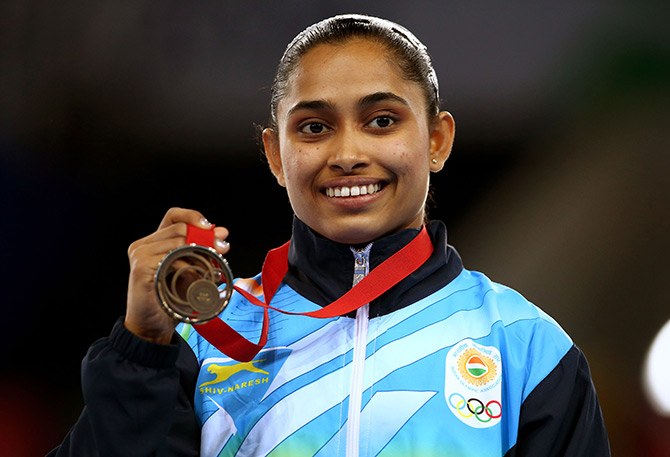 In Glasgow, she missed out on qualifying for next year's Rio Olympics by 0.4 of a point.

"I was off mood for a couple of days as I felt qualification slipped away by such a negligible margin," Karmakar said as she pressed her thumb and index finger together while sitting on a bed strewn with various clothes in her Glasgow hotel room.

"But my parents told me that not even in their wildest dreams did they think their daughter would achieve so much so I should not be so hard on myself as they are very proud of me," added the gymnast who could still make it to Brazil if she gets a medal on Saturday.

Such is her single-minded focus on her training, when Rahul Dravid requested a meeting so that they could set up an arrangement with his GoSports Foundation -- a donor-funded non-profit venture that helps to secure funds for struggling Indian athletes -- the former India cricket captain was told he would have to wait for an audience till after the Glasgow championships.

Having faced so many hardships in her life, does she wish that her father, who has funded his daughter's career, had introduced her to more a financially rewarding sport?

"I'm very lucky that my dad introduced me to gymnastics rather than tennis or badminton because I am so lucky to have been blessed with such a dedicated coach," said Karmakar, who has a photograph of herself with 2008 Olympic champion Nastia Liukin up on her bedroom wall.

"To me he is the world's best coach and I credit 70 percent of my success to him because it is thanks to his hard work that I am the gymnast I am today.

"The only goals I have left is to be an Olympian and when I get there, to take back a medal for India."

© Copyright 2022 Reuters Limited. All rights reserved. Republication or redistribution of Reuters content, including by framing or similar means, is expressly prohibited without the prior written consent of Reuters. Reuters shall not be liable for any errors or delays in the content, or for any actions taken in reliance thereon.
Related News: Dipa Karmakar, India, IMAGE, Agartala, Reuters
COMMENT
Print this article