India's top-ranked men's player Saurav Ghosal gave a glimpse of his fighting abilities before going down 1-3 to Stewart Boswell of Australia in the opening round of the JP Morgan Tournament of Champions in New York.

Playing in his first major championship after the Punj Llyod PSA Squash tournament in December last year here, the Guangzhou Asian Games bronze medallist was perfect in his approach and performed to the best of his abilities but failed to sign off on a winning note.

Boswell won the first game by a five-point margin before the 24-year-old Indian ran to a 6-1 lead in the second. The 32-year-old Aussie surged back to secure the game 11-8.

Boswell was unable to convert two game balls in the third, which was tallied 16-14 in Ghosal's favour. The fourth was all about Boswell who took the lead at 2-1 before sealing the issue in 70 minutes.

The veteran Australian was pleased with the victory. "For as long as I play squash, I want to be here at the Tournament of Champions and make the most of it."

Boswell will face top seed Ramy Ashour, who defeated Olli Tuominen of Finland in straight games, in the second round.

This is the first PSA World Series squash event of the year.

All other top seed men's players including top seed Egypt's Ramy Ashour, world number one Nick Matthew of England, England's James Willstrop and David Palmer of Australia advanced to the second round of the tournament.

Meanwhile, England's Nick Matthew and Malaysia's Nicol David were honoured as 'Players of the Year' at the annual World Squash Awards held last night in the Vanderbilt Hall at Grand Central Terminal in New York.

The sixth year of the prestigious awards event was the first to be staged outside of the UK since being inaugurated by founders Eventis Sports Marketing and attracted more than 150 leading figures from the squash world.

Matthew had an outstanding year, winning the World Open, two Commonwealth Games Gold medals, and finishing the year as world No 1. The Englishman received the PSA Player of the Year award for the first time, from PSA CEO Alex Gough.

David, who remained unbeaten in the whole of 2010, collected her award for the sixth year in a row.

The World Squash Awards were founded in 2005 and are endorsed annually by the WSF, the PSA and the WISPA. 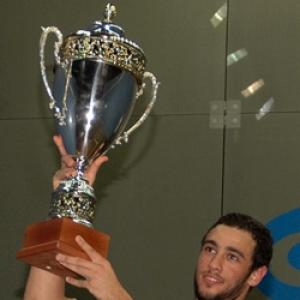