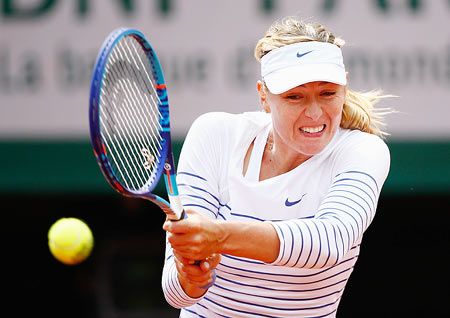 The Russian showed no ill-effects from a cold as she swept past fellow Russian Fed Cup team member Vitalia Diatchenko 6-3, 6-1 on Court Philippe Chatrier to reach the third round on Wednesday.

Sharapova skipped Russia's Fed Cup semi-final against Germany last month -- a decision that proved wise as she enjoyed a strong run in Madrid where she reached the semi-finals and in Rome where she claimed the title.

She is committed to the Fed Cup team, however, and played in the quarter-final against Poland shortly after reaching the Australian Open final.

The 28-year-old said it can be a hassle though.

"It's more the timing of the events that are just really unfortunate," she told reporters.

"I have been very vocal about it. I don't think anyone's that's making the Fed Cup schedule is thinking about the players that go far in Grand Slams.

"They don't understand or appreciate how much mental and physical strength it takes to get to that.

"To schedule a Fed Cup match right after a Grand Slam; it's just pointless, in my opinion.

"I had an amazing time playing this year, and I want to play in the future, but the schedule just does not give me any chance to do so. As much as I want to be part of it, it's just -- it's really a hassle."

She even suggested the Fed Cup should not be held every year.

"I think it would be much more successful if it actually had a legitimate schedule and maybe not every single year."

© Copyright 2022 Reuters Limited. All rights reserved. Republication or redistribution of Reuters content, including by framing or similar means, is expressly prohibited without the prior written consent of Reuters. Reuters shall not be liable for any errors or delays in the content, or for any actions taken in reliance thereon.
Related News: Fed, Maria Sharapova, Vitalia Diatchenko, Philippe Chatrier, Madrid
COMMENT
Print this article