Images from Day 7 of the 2019 French Open in Paris on Saturday. 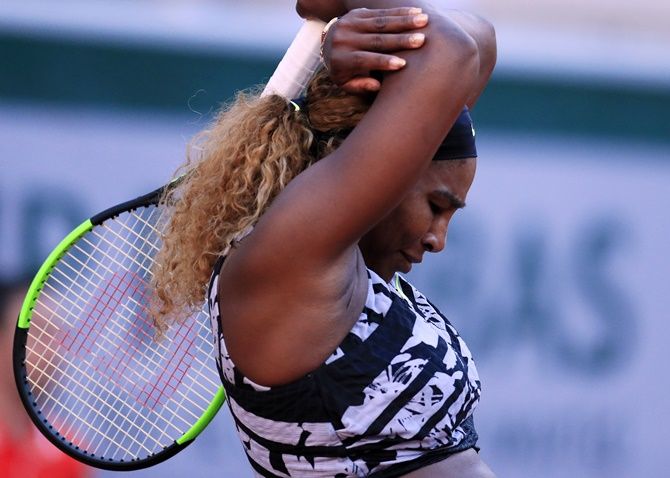 IMAGE: Serena Williams of the US reacts during her third round match against Sofia Kenin. Photograph: Gonzalo Fuentes/Reuters

Serena Williams's quest for a record-equalling 24th Grand Slam singles title was put on hold on Saturday after the former world number one was knocked out of the French Open in the third round following a 6-2, 7-5 defeat by fellow American Sofia Kenin.

Chasing Margaret Smith Court's all-time record, which was built over the amateur and professional eras, Williams failed to recover from a woeful opening set on Court Philippe Chatrier.

In the players' first meeting, world number 35 Kenin pulled Williams around the court and made the most of her opponent's unforced errors to set up a last-16 encounter with Australian eighth seed Ashleigh Barty.

Williams won the last of her 23 major singles titles at the 2017 Australian Open. 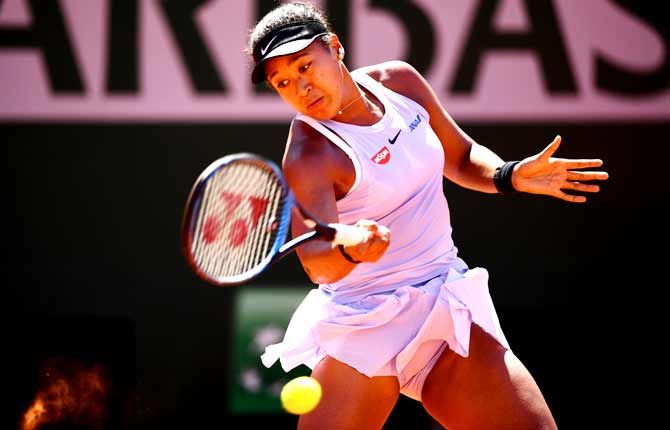 Naomi Osaka’s 16-match winning streak in Grand Slam tournaments came to an end in straight sets at the hands of Katerina Siniakova in the third round of the French Open.

The top-seeded Osaka was beaten by Czech Siniakova, the world’s top-ranked doubles player, 6-4, 6-2 on a hot day at the Court Suzanne-Lenglen at Roland Garros.

Osaka, who has yet to reach the second week in four appearances in Paris, got broken three times and failed to take her chances. Despite entering Roland Garros as world No. 1 for the first time, Osaka was taken to three sets in her first two matches. She rallied back to beat world No. 90 Anna Karolina Schmiedlova of Slovakia in the first round after losing the first set, and recovered from a set and a break down in a second-round clash against fellow double Grand Slam winner Victoria Azarenka of Belarus.

With back-to-back titles at the US Open and the Australian Open, the 21-year-old from Japan had been trying to do something not even the greatest players in tennis history have done: winning their first three Grand Slam singles title in a row.

The 42nd-ranked Siniakova, the reigning French Open and Wimbledon doubles champion, showed off her doubles credentials in the opening set, unsettling her opponent with sliced forehands and drop shots.

Breaking serve at 4-4, Siniakova clinched the first set in 44 minutes on her second set point as Osaka dumped a forehand into the net. Osaka struggled to settle in the second set, going down a double break with a double fault.

Serving for her first win over a world No. 1 at 5-2, Siniakova kept her nerve and won the match on Osaka’s 38th error.

Djokovic saunters into fourth round 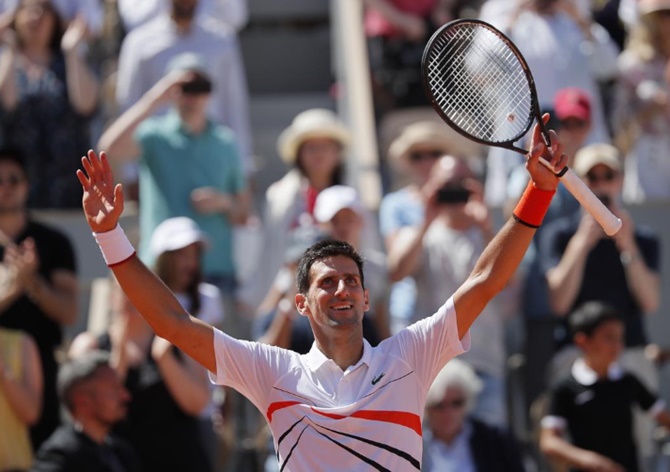 Djokovic has never lost a Grand Slam match to a player ranked as low as Caruso, and never showed any sign of doing so on Saturday, breezing to a two match-point advantage in little over two hours. He only needed one of those to put Caruso, ranked 147 in the world, out his misery.

The Serbian is yet to drop a set in the tournament and has rarely had such an easy run into the fourth round at Roland Garros. He will face either Germany's Jan-Lennard Struff or 13th seed Borna Coric of Croatia next.

"The conditions were very hot today, different to the days before and so tough physically," Djokovic said after the game, under a blazing sun on the Philippe Chatrier court.

Djokovic is bidding to win his 16th Grand Slam title. Last year's runner-up Dominic Thiem of Austria overcame a second-set blip as he huffed and puffed into the fourth round of the French Open with a 6-3, 4-6, 6-2, 7-5 win against Uruguay's Pablo Cuevas.

The fourth seed lost control at times on Court Suzanne Lenglen, but his bludgeoning forehand made the difference as he set up a meeting with local favourite Gael Monfils.

Monfils had no trouble seeing off fellow Frenchman Antoine Hoang, whose wild-card run came to an end in a 6-3, 6-2, 6-3 defeat on Court Philippe Chatrier.

Thiem's opponent, world number 47 and claycourt expert Cuevas, was a tougher nut to crack but it was a matter of when, not if, for the Austrian.

Halep races past Tsurenko to move into fourth round 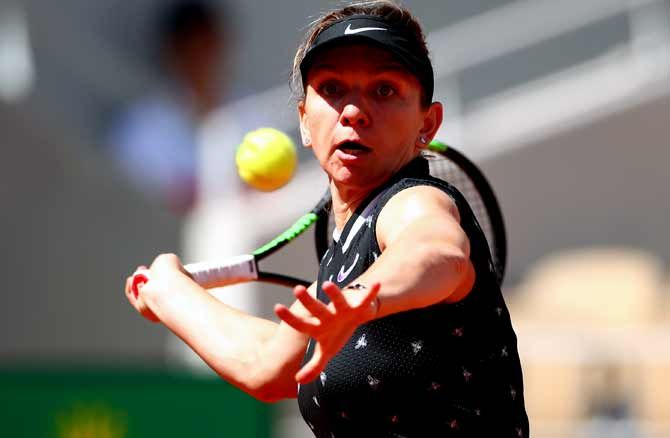 IMAGE: Simona Halep in action during her third round match against Lesia Tsurenko of Ukraine. Photograph: Clive Brunskill/Getty Images

A ruthlessly efficient Simona Halep marched into the fourth round of the French Open on Saturday, dropping just three games against Lesia Tsurenko.

Halep, the defending champion from Romania, had been forced to go the distance in the first two rounds. Playing her best match of the tournament, she had no trouble against an error-strewn Tsurenko, winning 6-2, 6-1 in just 55 minutes to extend her win streak against the No. 27 seed from Ukraine to 8-0.

After a relatively cool start to the first week of the French Open, temperatures are expected to soar to as high as 30 degrees Celsius (86 F) at the end of the afternoon at Roland Garros in Paris.

Taking advantage of the balls kicking up higher on the clay of the main Court Philippe-Chatrier, Halep took the first set in just 28 minutes as she dominated her opponent from the back of the court. Tsurenko, who had won her previous match 11-9 in the decider against Serbia’s Aleksandra Krunic playing with a broken racket, requested a medical timeout as she trailed 3-0 in the second set.

Watched by Romanian billionaire Ion Tiriac, Halep’s intensity never dropped, as she took a 4-0 lead with aggressive shot-making. Serving for the match at 5-0, Halep got broken, but booked a spot in the fourth round in the next game with a volley, her ninth winner. She made 14 errors, while Tsurenko had just 8 winners and made 32 unforced errors.

"It was a tough match even if the scoreline does not show it," Halep said.

"Every day in my life I have that image of me winning last year in my mind, it was my greatest moment of my career and it was all the more satisfying for having won here in the juniors as well."

Zverev through to fourth round after another five-setter It took Alexander Zverev all five sets again as he advanced into the fourth round of the French Open with a 6-4, 6-2, 4-6, 1-6, 6-2 victory over Serbian Dusan Lajovic.

The German fifth seed, who fought his way through a five-set thriller in the opening round, threw away a two-set lead against the 30th seed on Court Simonne Mathieu before setting up a meeting with Fabio Fognini.

It was a highly inconsistent performance by the lanky 22-year-old Zverev, who will need to sharpen his focus against the Italian ninth seed.

Zverev did not make things easy for himself as he fell 3-1 behind in the opening set before managing to turn things around and take the lead.

He raced through the second only to find himself on the back foot again in the third and fourth as Lajovic forced a decider with temperatures flirting with 30 degrees Celsius -- a contrast with the chilly weather in the first week of the tournament.

After an early trade of breaks in the fifth, Zverev finally got his confidence back and finished it off with a whipping forehand, his 52nd winner barely making up for a woeful 55 unforced errors.

Tsitsipas, Wawrinka to clash in fourth round Greek sixth seed Stefanos Tsitsipas dug deep to book his place in the French Open fourth round on Saturday, completing a 7-5, 6-3, 6-7(5), 7-6(6) victory against Serbian Filip Krajinovic after play was suspended on Friday night.

The match resumed at 5-5 in the third set and Tsitsipas looked wobbly in losing the tiebreak before finally winning in four sets thanks to his opponent's nerves on Court Philippe-Chatrier.

A runner-up in Madrid and semi-finalist in Rome in the run-up to the claycourt Grand Slam, Tsitsipas had breezed through the first two sets and appeared on the brink of a no-nonsense win when play resumed in searing heat on Saturday.

But Krajinovic threw everything he had at Tsitsipas, which unsettled the 20-year-old.

Two straight double faults handed a break to Krajinovic in the fourth set, but the Serbian let his guard down and allowed Tsitsipas to get another crack at a tiebreak.

The Greek saved a set point as Krajinovic lost his composure, hitting long on the first match point.

“I saw that I could increase my tennis level in the right moments, in important moments,” Wawrinka told reporters.

“I want to continue, and I will try to do that tomorrow. “He’s (Tsitsipas) a really young player, already at the top of the game, already winning a lot of matches, already beating the top players, making his way to an even better career... I’m happy to face this challenge.”

© Copyright 2021 Reuters Limited. All rights reserved. Republication or redistribution of Reuters content, including by framing or similar means, is expressly prohibited without the prior written consent of Reuters. Reuters shall not be liable for any errors or delays in the content, or for any actions taken in reliance thereon.
Related News: Simona Halep, Stefanos Tsitsipas, Filip Krajinovic, Lesia Tsurenko, Court Philippe-Chatrier
SHARE THIS STORYCOMMENT
Print this article 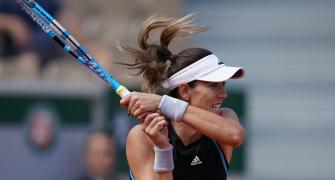 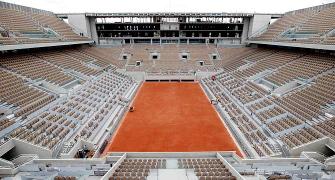 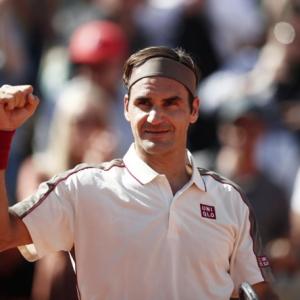 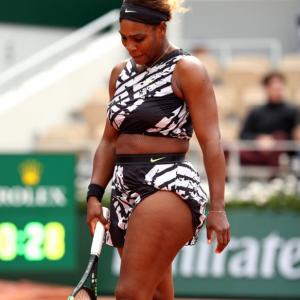