Roger Federer and Novak Djokovic faced fired-up Frenchmen and partisan crowds at Roland Garros on Friday, and took differing routes to negotiate safely past them into the fourth round of the Grand Slam.

Third seed and former champion Federer looked less than superhuman when he had to recover from a second-set loss to beat Nicolas Mahut 6-3, 4-6, 6-2, 7-5 on Philippe Chatrier Court.

Over on Suzanne Lenglen Court, as the sun was starting to set, top seed Djokovic had an entertaining, though one-sided, 6-1, 6-2, 6-2 win over Nicolas Devilder, the lowest-ranked man left in the draw at 286th. 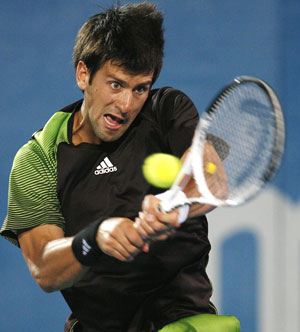 Radwanska looked uneasy in a 6-1, 6-2 loss to 2009 French champion Svetlana Kuznetsova of Russia, while Ivanovic blamed herself for being "flat-footed" in a 1-6, 7-5, 6-3 defeat by Italy's Sara Errani.

Federer's survival made one fan particularly happy. Belgian David Goffin, who stuck posters of the Swiss 16-times Grand-Slam champion on his bedroom wall when he was younger, will be next up across the court for the 2009 title winner.

Goffin became the first lucky loser to reach the fourth round at a Grand Slam since his compatriot Dick Norman at Wimbledon in 1995 and also has the distinction, at 21, of being the youngest man left in play here.

"I've been watching Roger playing on telly for so many years," said Goffin, who had to be treated for a bloody finger during his 7-6, 7-5, 6-1 win over Pole Lukasz Kubot.

"Roger has always been my favourite. He has perfect tennis, perfect technique, and I like the man."

Told about Goffin's hero worship, Federer laughed and said: "I'm happy to hear it. It's going to be an unusual match for me, knowing that now."

The French fans played a great part in Friday's big matches, encouraging Mahut to level against Federer with his first break point of the meeting.

Mahut, whose name is in the record books after he lost to American John Isner in the longest match ever played, at Wimbledon two years ago, was delighted with himself for unsettling Federer.

"It is maybe because of my game that he wasn't able to play better," the 89th-ranked Mahut told a news conference. "I was able to force him to play bad in a way."

Qualifier Devilder was also cheered wildly by the crowd, though in his case there were no breaks, just five occasions when he managed to hold his own serve.

Djokovic won over the fans as well, joining in a Mexican wave halfway through the third set, though his antics nearly backfired when he found himself taken to breakpoint.

The light was fading by the time the Serbian passed Devilder with a fierce forehand on the first of three match points to finish off the victory in an hour and 44 minutes.

"The last 15 minutes was very hard," said Djokovic when asked about the dwindling light. "But it was very important for me to finish the match today. I wouldn't like to come back tomorrow and play a few games."

Devilder, 32, was happy despite the defeat, saying: "The crowd was behind me supporting me and I had to make the most out of it. It's going to be a great memory."

While the French fans were sorry to lose Mahut and Devilder, fifth seed Jo-Wilfried Tsonga lived to fight another day for them when he beat Italian showman Fabio Fognini 7-5, 6-4, 6-4.

© Copyright 2021 Reuters Limited. All rights reserved. Republication or redistribution of Reuters content, including by framing or similar means, is expressly prohibited without the prior written consent of Reuters. Reuters shall not be liable for any errors or delays in the content, or for any actions taken in reliance thereon.
Related News: Roger Federer, Novak Djokovic, Nicolas Devilder, David Goffin, Ana Ivanovic
SHARE THIS STORYCOMMENT
Print this article 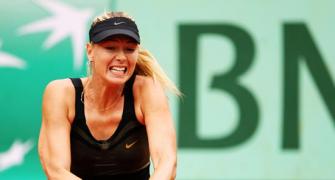 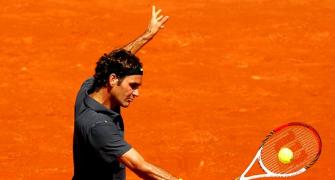 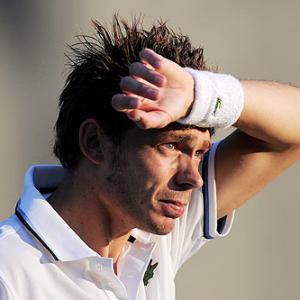 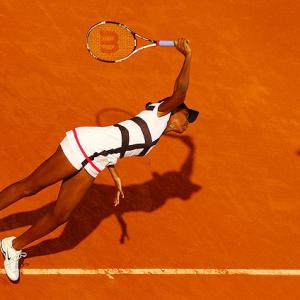