Sania Mirza, on Sunday, reached her first ever French Open women's doubles quarter-finals with partner Elena Vesnina but Mahesh Bhuapthi's campaign ended after suffering a second round defeat in the mixed doubles along with Jie Zheng.

The Indo-Russian pair now have a tough task at hand as they face top seeds Gisela Dulko of Argentina and Flavia Pennetta of Italy.

This is Sania's best doubles performance at Grand Slams since 2008, when she had reached the last-eight stage at Wimbledon with American partner Bethanie Mattek.

This is also only third time in Sania's career that she has reached the quarter-finals of a Grand Slam. The first time she made the grade was in 2007 at US Open with Mattek.

On Sunday, Sania-Elena saved 10 breakpoints from 12 and converted five of 10 in the one hour 26 minutes clash.

Bhupathi has already exited from the men's doubles along with compatriot Leander Paes.

India's hopes in the mixed doubles are still alive as Paes and his partner Iveta Benesova have reached the quarter-finals, where they will clash with top seeded pair of Katarina Srebotnik of Slovakia and Nenad Zimonjic of Serbia. 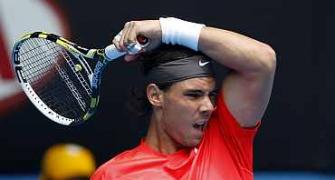 Paes-Bhupathi knocked out of French Open