Services successfully defended their Santosh Trophy title after they defeated the hosts Kerala 4-3 in penalty shootout in the summit clash of the 67th edition of the National Football Championships in Kochi, on Sunday.

The two sides were locked in a goalless draw in the regulation and extra time and Services players held on their nerves to emerge champions at the Jawaharlal Nehru Stadium.

Kerala rightback Surjith's shot hit the horizontal and the Services players erupted in unbridled joy to the disappointment of the home side supporters who turned out in large numbers.

For Services, Dhanji Singh, Sharwan Kumar, M Dileep and Kiran K Varghese scored while two shots were saved by Kerala custodian Jean Christian. For the hosts, Rino Anto, Abdul Basid and BT Sarath found the back of the net in the penalty shootout. 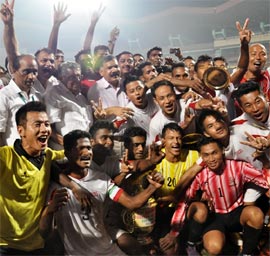 Services had the first go at the opponents' goal in the sixth minute. But the hero of the second semi-final, Lalian Mawia shot over from inside the box.

Kerala's first chance came in the 11th minute. Kannan, who played in the final shrugging off an injury, latched on to a cross from the midfield inside the 18-yard box. But his strike brought out the best in Services goalkeeper Nano Singh.

Mawia had another chance to make amends in the 25th minute when he was set up on top of the box by Subrata Sarkar. But this time the Kerala goalkeeper blocked his effort.

The change of ends saw no change of fortunes for either outfit. They played with same verve but the elusive goal was not coming. If Kerala's rearguard must be credited for their resilience, Services custodian Nano proved to be a rock under the bar.

The midfield battle was intriguing too as both the sides could read each other's moves, thus increasing the interception rate.

In extra time, Kerala looked the more purposeful side. Not only did they raid the rival citadel frequently, but the hosts also defended sturdily. Goalkeeper Jean Christian deserves a special mention for his couple of acrobatic saves.

Usman came closest twice in each half in the extra time. His shot off Shibin Lal's spadework flew inches over the bar in the 105th minute. Early in the second half of extra time, the striker's effort hit the chest of the goalkeeper after he was set up by substitute Nazarudeen.

Services lacked the teeth up front and the reason was the absence of their top goal getter V V Farhad due to injury. 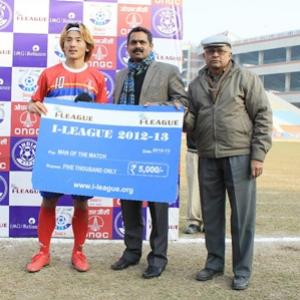