Aguero collapses at halftime as Argentina lose to Nigeria 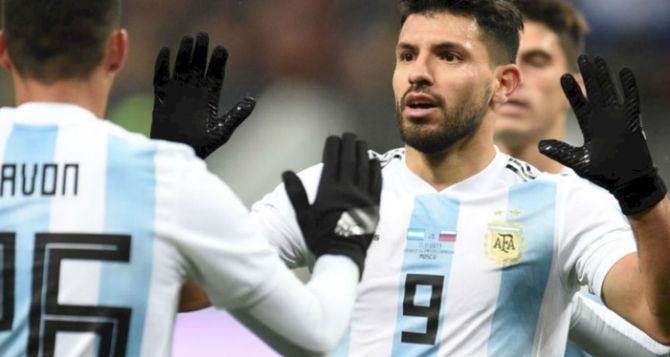 Argentina striker Sergio Aguero collapsed in the dressing room at halftime before they lost 4-2 to fellow World Cup qualifiers Nigeria after taking a two-goal lead in a friendly in Krasnodar, Russia on Tuesday.

The Argentine Football Association (AFA) said in a statement that Aguero, who scored in the first half, was taken away for routine examinations but added: "The player is well".

His Premier League club Manchester City said the 29-year-old Aguero had been cleared by doctors to return to England as planned after he suffered what they called "a dizzy spell".

"Sergio never lost consciousness, and was taken to hospital for precautionary medical checks," City said on their official website.

Argentina coach Jorge Sampaoli rested Lionel Messi following the 1-0 win over next year's World Cup hosts Russia on Saturday and it seemed that they could cope without him.

Ever Banega curled in a free kick, awarded after Nigeria goalkeeper Daniel Akpeyi picked the ball up outside his area, in the 28th minute and Aguero finished off a sweeping counter-attack eight minutes later.

First, he emulated Banega by scoring from a free kick on the stroke of halftime and then set up the equaliser by pulling the ball back for Alex Iwobi to net seven minutes after the re-start.

The Super Eagles took the lead two minutes after that when Brian Idowu sidefooted home from the edge of the area to finish off a counter attack.

A superb goal by Iwobi completed the comeback in the 73rd minute as he collected the ball, slipped it between Javier Mascherano's legs and fired past Agustin Marchesin.

Argentina staggered through their World Cup qualifying campaign, only clinching their place at the finals with a 3-1 win in Ecuador in their final match.

Aguero will be assessed by Manchester City's medical team ahead of this weekend’s Premier League trip to Leicester City.

Germany's Lars Stindl scored a last-gasp equaliser to rescue a 2-2 draw against France in a friendly on Tuesday as the world champions stretched their unbeaten run to 21 matches.

France twice led through Alexandre Lacazette, who netted either side of Timo Werner's leveller, but Stindl struck in stoppage time to rescue the hosts.

Germany, whose last defeat came against France in the semi-final of Euro 2016, have now failed to beat them at home since 1987.

Both teams have qualified for next year's World Cup in Russia and are considered among the title favourites.

Germany coach Joachim Loew was eager to test his squad and made six changes to the team that drew 0-0 against England at Wembley on Friday, including three in defence.

But the hosts struggled under early French pressure, with the speedy Kylian Mbappe and Blaise Matuidi a constant threat.

Lacazette, replacing injured forward Olivier Giroud, forced a good save from Germany keeper Kevin Trapp with a powerful shot but went one better in the 34th minute, tapping in from close range after superb work from Anthony Martial.

The Germans woke up after the break and substitute Antonio Rudiger should have levelled when he was set up by Julian Draxler in the box.

Instead it was Werner who grabbed the equaliser in the 56th minute with his seventh goal in his 10th international as he finished off a quick break launched by Mesut Ozil.

Toni Kroos then hit the bar in the 70th as the Germans looked to be in complete control before another quick French break earned the hosts their second goal.

Denmark's hat-trick hero Christian Eriksen said his performance in their 5-1 demolition of Ireland on Tuesday would be life-changing after they booked a ticket to next year's World Cup.

The midfield maestro, who had missed a couple of decent chances in the goalless playoff first leg, made no mistake in the Dublin return as his treble put the Irish to the sword.

The Danes also benefitted from an Andreas Christensen goal, that cancelled out Shane Duffy's early header for Ireland, and a late Nicklas Bendtner penalty but Eriksen stole the show.

Despite the plaudits of his team mates and his central role in the victory, Eriksen was his usual humble self.

The Danes did not panic when Duffy scored and a short corner saw Pione Sisto beat Harry Arter before flashing the ball across the box where Christensen's shot was deflected into the net by Ireland's Cyrus Christie just before the half-hour mark.

He added Denmark's second soon after and put the game out of Ireland's reach just past the hour before completing his treble.

Eriksen, who has scored 21 times in 75 internationals, said there were more goals to come from Denmark in Russia.

Belgium striker Romelu Lukaku became his country's leading scorer at the age of 24 when his goal gave them a 1-0 win over fellow World Cup qualifiers Japan in a friendly in Bruges on Tuesday.

In a game that Belgian officials said was nearly called off after a terrorism scare, Lukaku scored with the easiest of headers at the far post from Nacer Chadli's cross to take his tally to 31 goals in 65 appearances.

Belgium extended their unbeaten run to 15 games, their last defeat having come against Spain in a friendly in September last year.

The Belgian football association, quoted by public broadcaster RTBF, said that in the end there had been no danger to the public, although extra security measures, including metal detectors, meant many fans were late taking their seats.

Bruges police told local media they had been warned by the federal authorities shortly before the kick-off of a possible attack during the match, prompting the additional checks.

Belgium has been on high alert since Brussels-based Islamic State militants attacked Paris, including a France-Germany soccer friendly in the city, two years and one day ago. Brussels itself was attacked by IS suicide bombers in March last year.

Teenager Weston McKennie scored on his debut for the United States as they held Portugal to a 1-1 draw on Tuesday in their first match since failing to qualify for the World Cup.

As well as 19-year-old McKennie, caretaker coach Dave Sarachan also gave 18-year-old Tyler Adams his first outing in the match in Leiria -- the first time since 1988 that two teenagers have started a game for the US.

Portugal, who unlike their opponents safely qualified for the World Cup, also fielded an experimental side, resting players like Rui Patricio, Bernardo Silva, Ricardo Quaresma, Cristiano Ronaldo and Joao Mario.

The US went ahead in the 21st minute after the ball was played out to CJ Sapong on the left wing and he slipped it to midfielder McKennie, who outfoxed his marker before scoring with a classy finish.

The European champions were gifted an equaliser 10 minutes later when US goalkeeper Ethan Horvath allowed a harmless Vitorino Antunes cross to slip through his legs and into the net.

Both teams had chances after the break, with Goncalo Paciencia hitting the bar for Portugal, before the game petered out into a draw.

Portugal defender Pepe limped off with a foot injury in the 10th minute but it did not appear to be serious.

Fernando Santos, the Portugal coach, was not satisfied with his team's display.

© Copyright 2021 Reuters Limited. All rights reserved. Republication or redistribution of Reuters content, including by framing or similar means, is expressly prohibited without the prior written consent of Reuters. Reuters shall not be liable for any errors or delays in the content, or for any actions taken in reliance thereon.
Related News: Sergio Aguero, Christian Eriksen, Romelu Lukaku, Weston McKennie, Danes
SHARE THIS STORYCOMMENT
Print this article 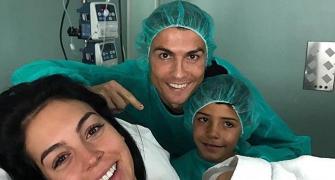 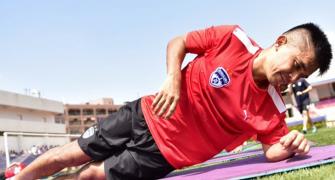 Why this coach is offering Indian football star a Myanmar passport 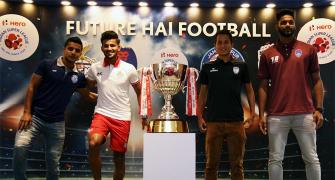 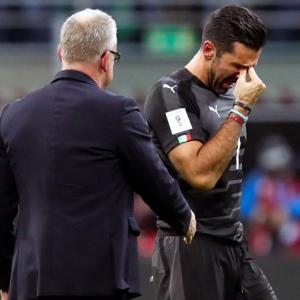 Heartbreak for Italy as they fail to qualify for World Cup