eal Madrid captain Sergio Ramos risks being hit with an extra game suspension which would rule him out of a potential Champions League quarter-final first leg after admitting he got booked on purpose in Wednesday's 2-1 win at Ajax Amsterdam.

With Madrid 2-1 up in the last-16 first leg, Ramos was shown a yellow card in the 89th minute, his third booking of the European campaign which means he will be suspended from the second leg of the tie in the Spanish capital on March 5.

Should Madrid progress to the quarter-finals, Ramos would then have a clean slate for the final stretch of Europe's elite competition, which his side have monopolised since 2016.

But in an extraordinary post-match interview, Ramos said he had intentionally got booked against Ajax, which is against UEFA's rules and punishable with a suspension of an extra game.

"Looking at the result I would be lying if I said it wasn't intentional," Ramos told television reporters.

"It's something I was thinking about, it's not to underestimate the opponent nor say the tie is over but in football you have to take difficult decisions so I decided to do it."

The Spain international, who was playing his 600th game for Madrid, later attempted to row back on his comments with two posts on Twitter in which he regretted getting suspended for the second leg.

"In a game there is always a lot of tension and you have to take decisions in seconds. The best thing about tonight was the result, the worst that I will not be in the second leg due to one moment in the game," Ramos wrote.

"I want to make it clear that this hurts me more than it would hurt anyone, I did not get the yellow card on purpose, just like the last yellow card I got in the competition, and I will be supporting from the stands like any other fan hoping we get into the quarter-finals."

Ramos' teammate Dani Carvajal was punished by UEFA last season for intentionally getting booked in a group stage game at APOEL Nicosia.

The defender was charged by UEFA's disciplinary committee for "receiving a yellow card on purpose" and was suspended for their final group game against Borussia Dortmund and their last-16 first leg against Paris St Germain. 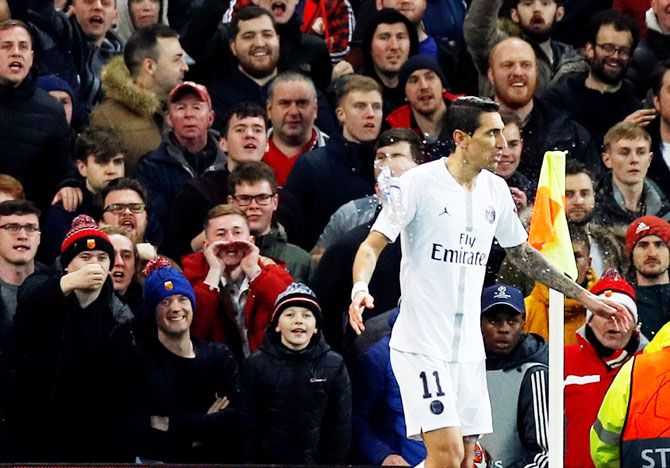 IMAGE: A bottle is thrown at Paris St Germain's Angel Di Maria during the Champions League match on February 12. Di Maria was booed from the outset by the United supporters before a beer bottle was thrown from the crowd towards him in the second half, which he picked up and pretended to take a swig from. Photograph: Phil Noble/Reuters

Di Maria was booed from the outset by the United supporters before a beer bottle was thrown from the crowd towards him in the second half, which he picked up and pretended to take a swig from.

The Argentina forward joined United in 2014 for a then club record 59.7 million pounds ($76.88 million) but an underwhelming debut season under then-manager Louis Van Gaal led to his departure to PSG a year later.

United were also charged for the blocking of stairways, while PSG have been hit with four different counts with the travelling fans alleged to have set off fireworks, thrown objects and committed acts of damage along with other crowd disturbances.

The case will be heard by UEFA's control, ethics and disciplinary body on February 28.

Liverpool manager Juergen Klopp was charged by the English Football Association (FA) on Wednesday over comments he made about the referee after his side's 1-1 draw with West Ham United in the Premier League on February 4.

The German manager said referee Kevin Friend's performance was affected by the decision to allow Sadio Mane's opening goal, which should have been ruled out for offside.

The FA said Klopp had been charged as the comments "questioned the integrity of the referee and/or implied bias".

West Ham equalised through Michail Antonio's goal before the interval but Klopp said Friend "did not want to open the gap any more" in the second half.

"As a human being, if I know I have made a big mistake in the first half, I don't want to open the gap any more," Klopp said after the match at the London Stadium.

"Referees are obviously human beings, and I understand that, but I didn't during the game because I had no clue that our goal was offside."

Klopp has until 1800 GMT on Monday to respond to the charge.

Inter Milan's leading scorer Mauro Icardi does not to want to play in their Europa League match against Rapid Vienna on Thursday after being stripped of the club captaincy, coach Luciano Spalletti said on Wednesday.

Spalletti said the "difficult and painful" decision was made to remove the captaincy because the protracted negotiations over a possible extension of Icardi's contract were distracting the player and the team.

The captaincy has been passed to goalkeeper Samir Handanovic.

Argentine forward Icardi has been Inter's leading marksman in Serie A for the last four seasons and is also top scorer this term with nine goals, although he has not hit the target in their last seven league outings.

"The decision to remove the captain's armband from Icardi was difficult and painful, because we all know what he is worth to the team," Spalletti told reporters.

"But it was divided between all parts of the club and was made exclusively for the good of Inter. Obviously, he took it badly but there are things which disturb him and the team."

Spalletti said that Icardi was initially included in the squad for Thursday's match but he "did not want to join up with the team."

After Saturday's 1-0 win at Parma, Spalletti appeared to criticise the club for not finalising a deal with Icardi to extend his contract, which still has 2-1/2 years to run.

"I was wrongly interpreted and I do not deal with contracts but it was clear that there are things concerning Icardi which must be sorted out, and his decision to not accept the call-up today shows this," he said.

Icardi has had a turbulent relationship with the club and its fans and often provides fodder for the gossip columns, partly thanks to his marriage to Argentine media personality Wanda Nara, who was previously married to Icardi's formerteam mate Maxi Lopez.

Nara is also Icardi's agent, and last month the player said she would continue to represent him for the rest of his career following a report in Gazzetta dello Sport that Inter wanted to deal with someone else.

In 2016, Icardi was jeered and insulted by Inter's "ultra" fans during a match against Cagliari after they were angered by a chapter in his autobiography where he described a confrontation with supporters the year before.

West Ham's Rice chooses to play for England over Ireland

West Ham United midfielder Declan Rice has announced on Wednesday his intention to continue his international career with England, after having previously played for Ireland.

Rice, 20, was capped three times by Ireland, but all of his appearances were in friendlies, which allows him to swap his international allegiance to the country of his birth.

Rice, who has made 59 appearances for West Ham, has excelled this season at London Stadium and has attracted England boss Gareth Southgate's attention.

"This has been an extremely difficult decision and, in all honesty, not one I ever expected to be making at this stage of my career," Rice said in a statement.

"In recent weeks and months, I have discussed the situation with the people who mean the most to me. My parents, my family, my girlfriend and my closest friends.

"I have also spoken to Martin O'Neill, Mick McCarthy, Gareth Southgate and to friends and colleagues within the game whose opinion I respect. I am truly grateful for the support I have received leading to this decision."

The news comes a setback for McCarthy, who returned for his second spell as Ireland manager after the departure of O'Neill in November.

"Declan rang me today and said he has decided to give it a go with England. Good luck to him," McCarthy said.

© Copyright 2021 Reuters Limited. All rights reserved. Republication or redistribution of Reuters content, including by framing or similar means, is expressly prohibited without the prior written consent of Reuters. Reuters shall not be liable for any errors or delays in the content, or for any actions taken in reliance thereon.
Related News: Mauro Icardi, Juergen Klopp, Paris St Germain, West Ham United, Luciano Spalletti
COMMENT
Print this article 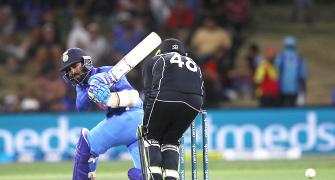 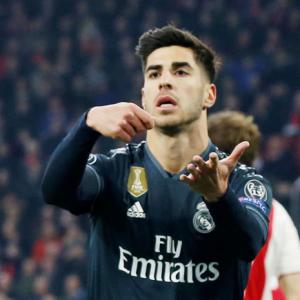