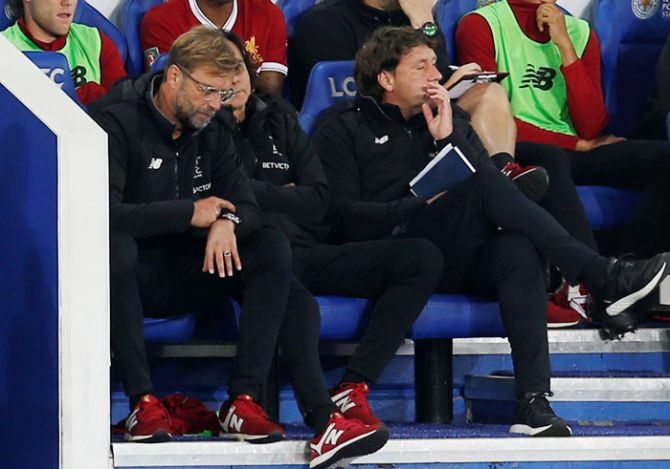 IMAGE: Liverpool manager Juergen Klopp (left) cuts a frustrated figure in the dug out during the League Cup match against Leicester City on Tuesday. Photograph: Ed Sykes/Action Images via Reuters

Liverpool manager Juergen Klopp said he was "sick of conceding goals" after his side's defensive problems returned to haunt them in a 2-0 League Cup defeat by Leicester City on Tuesday.

Klopp's side enjoyed 70 percent of the ball in the third round tie and had 21 shots compared to Leicester's eight, but failure to cope with basic defensive tasks cost them dear.

Liverpool have kept two clean sheets in nine matches so far this season and are winless in four games in all competitions.

Leicester substitute Shinji Okazaki took advantage in the 65th minute when Liverpool failed to clear a corner and the Japan forward's deflected shot crept into the net.

Liverpool's defence was also culpable in the 78th minute, switching off from a throw-in, although Islam Slimani's left-footed finish into the top corner was sublime.

"We played really good football in the first half, we should have decided the game early. We had big chances, strange situations but it's football, it's at least a 90-minute game," said Klopp, whose side were held to a 1-1 draw at home by Burnley in the Premier League on Saturday.

"It's second ball after a corner, I think, and a throw-in again. I'm sick of goals like this to be honest, you cannot play football and do that.

"Leicester somehow survived in the game because we are not clinical enough. That's sometimes okay but then you need to stay concentrated until the end and at least you don't allow them to score... and yeah, they scored too easy," he added.

India rode on a stirring second half show to blank Palestine 3-0 in the AFC U-16 Championship 2018 Qualifiers at the Halchowk Stadium in Kathmandu on Wednesday.

Givson opened the scoreline from an impeccable free-kick in the 51st minute. It was followed by a strike from Bekey in the 72nd minute. The last nail in the coffin was put by skipper Vikram in the 79th minute.

India came very close to draw the first blood in the 8th minute but Bekey's shot whizzed past the crossbar.

In the 25th minute, Givson, who was operating as a free-player at the middle, cut into from the middle but his cutting-edge could have been dealt better by Ricky.

Perhaps the biggest moment of the first-half for India came in the 28th minute when Harpreet's volley ricocheted off the crossbar to leave the India dugout aghast.

Gurkirat also tried his luck from 30-yards out but the Palestine goalkeeper collected it without any trouble.

Changing over, Givson stunned the Palestine goalkeeper in the 51st minute when his right-footed free-kick found the target leaving him stranded at the other end.

Bekey converted the meticulous cross from Ricky to double the lead in the 72nd minute.

India took the match by the scruff of the neck in the 79th minute when skipper Vikram blasted the net to make it 3-0.

India next play Nepal at the same venue on September 22.

Serie A: Inter draw with Bologna

Shaven-headed skipper Mauro Icardi rescued a 1-1 draw for Inter Milan at Bologna on Tuesday that ended his side's perfect start to the Serie A season.

According to AFP, Luciano Spalletti had been looking to make it five wins from five but had to settle for just one point in Bologna.

Simone Verdi's superb long range first-half goal was just the second conceded by Inter before Icardi stepped up to convert a contentious spot kick with 13 minutes to go at the Stadio Dall'Ara.

Now with 13 points, Inter move provisionally top but Juventus and Napoli can pull ahead when they play Fiorentina and Lazio respectively on Wednesday.

Brazil handshake snub gets thumbs down from Aus women footballers

Australia's women footballers have taken a dim view of the handshake snub they received from Brazil players after beating the South Americans 3-2 in a home match on Tuesday.

At the end of a heated contest in Newcastle, some 'Matildas' players were ignored as they approached their opponents to shake hands, triggering a storm of criticism on social media.

"Not shaking hands, it's not an Australian thing but I'm not really going to comment on it because it's not something I think is very... I don't really like it, but whatever," Australia striker Sam Kerr told local media.

"It was heated. I don't know how it started... But I guess that's what happens when you get under people's skin, not only in the game but the last three matches," she added of the trio of wins Australia have registered against Brazil.

"It was disappointing to see. We think of them as a very highly respectable team and I don't think we got the respect we deserved tonight after the last three performances."

Matildas coach Alen Stajcic agreed the Australians had rattled Brazil but stopped short of taking the visitors to task.

"They did (lose the plot). They're a proud footballing nation," he told Reuters in Melbourne on Wednesday.

"As we all know, football is as important as religion over there. We've got the wood on them at the moment.

"We're performing a little bit better than they are but at the end of the day, we've just got to keep it all in a bit of perspective."

The sixth-ranked Matildas have won their last five international matches and clinched the inaugural four-team Tournament of Nations in the United States last month. [nL4N1KQ1SV]

Belgian football officials are waiting to find out whether Brussels will be able to stage matches at the pan-European Euro 2020 tournament.

The building of a new Brussels stadium has run into delays involving the applications for construction and environmental permits and the Belgian FA says it is up to European soccer body UEFA to decide how long they want to wait for more progress.

"We still believe but we are realistic that it's a decision that depends on other parties," the Belgian federation’s secretary general Koen De Brabander told reporters from international news agencies. "We as a federation are not in the lead to take decisions.”

De Brabander said that a new application was lodged in August with the Flemish government, taking advantage of new legislation allowing for a more streamlined process. He said it would now take a maximum of 150 days for a decision to be made on planning permission and another 12 to 18 months for the stadium itself to be built.

That would mean the stadium should be ready in the autumn of 2019, nine months before the start of tournament. De Brabander said there was a meeting last week with the constructors and European soccer body UEFA. "It’s UEFA who has to take the decision,” he said.

Brussels is one of 13 cities around Europe which will host the tournament. It is due to stage matches in the group stage and round of 16. UEFA did not immediately respond to a request for comment.

De Brabander said the stadium would be built in any case as the Belgian national side needed a new home to replace the King Baudouin ground.

Real Madrid is the best represented club with a record 13 names on the international players' association FIFPro's shortlist of 55 contenders for its World XI Player Awards.

The Spanish giants, who won both the La Liga and Champions League titles last season, also held the previous club record of having 12 players on the list in both 2014 and 2015.

Nine Spaniards have made the shortlist, making Spain the most well-represented country, with France and Brazil close behind on seven nominations each.

England, who dominated the inaugural shortlist back in 2005 with 10 nominations, have just one representative this year in Tottenham Hotspur striker Harry Kane, who has made the list for the first time.

Portugal forward Cristiano Ronaldo and Juventus goalkeeper Gianluigi Buffon are also included, making them the only two players to make every shortlist since the first World XI in 2005.

About 25,000 professional footballers took part in the poll, which this year covers performances by players from August to June, aligned with the majority of club competitions. Previous editions covered player performances in a calendar year.

The final World XI will be announced at an awards ceremony in London on Oct. 23. 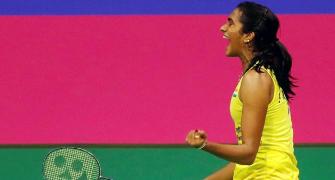 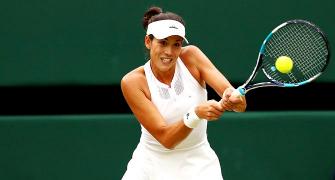