Even the brilliance of Malsawmtluanga Shylo, who netted a brace, could not help Salgaocar to their first win in 14 games, even though the Goan squad rallied to hold fancied Mahindra United to a 2-2 draw at the Cooperage, in Mumbai, on Wednesday.

Their first leg encounter too ended in a tie, albeit a scoreless one.

The relegation threat is still looming large over the mining outfit, which continues to scrape the bottom of the barrel with seven points, while Mahindra displace Mohun Bagan from fourth spot on the basis of more goals scored, although both sides have the same points (21) and same goal (+3) difference. The Kolkata brigade, however, have a game in hand.

The visitors opened the account in the 24th minute through 'Mama' off a lightning counter, the puny Mizo medio, a livewire on the right flank, finishing a move initiated by goalkeeper Milagrio Medeira, with a blinder of a strike.

Mahindra equalized a minute before half-time through a spot-kick, converted by Mohammed Rafi after substitute striker Sushil Kumar Singh was brought down in the box.

The pedestrian match perked up in the second-half with both sides hunting feverishly for the match-winner. Substitute K Thoi Singh (63rd minute) gave the locals the lead, tapping in a simple rebound after Medeira had parried Sushil Kumar's shot.

But man-of-the-match 'Mama' again came to Salgaocar's rescue a minute later, beating Sandip Nandy from close range after Felix Chimaokwu had squared the ball to him from the other side.

'Mama' could have got a hat-trick but he essayed a feeble shot from close in the 74th minute after darting in to meet a cross from the left flank.

Both sides missed chances, with Mahindra defender N P Pradeep coming close on a couple of occasions from set-pieces. Andrews Mensah could have settled the issue in the closing stages for Mahindra but the Ghanaian failed to trap cleanly in front of an open goal and the chance went abegging.

For the visitors, lanky Boniface Ambani spurned two good airborne chances and was pulled out in the second half.

The 'red devils', who had won their last four matches, were terribly disjointed today, being unable to strike a good rhythm. The visitors clearly had the better of the exchanges in this battle between two former champion clubs with Hery Habimana today functioning effectively as a defensive midfielder.

But all their effort could not give them their first win, the instructions shouted out by 'hands on' technical director Subhash Bhowmick notwithstanding.

Mahindra meet East Bengal in Kolkata on February 3 in the 15th round while Salgaocar too take on Mohun Bagan away the next day. 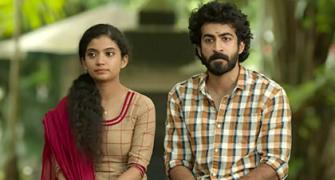 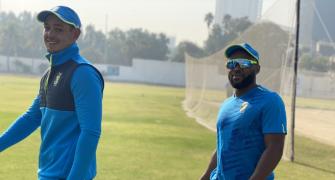