Maybe the venue was chosen in anticipation of an Andy Roddick victory, all heavy bass and drums, because the Swiss spends his time conducting sweet tennis symphonies. 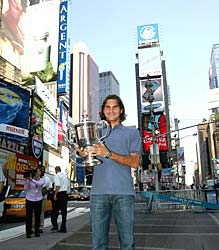 Federer's fourth Grand Slam title, courtesy of his 6-0, 7-6, 6-0 destruction of Lleyton Hewitt, was a victory for artistry over brute strength, for subtle angles and spins over the bludgeoning groundstrokes that dominate the modern game.

"I don't want to be cocky," Federer said on Monday. "But I do feel that I play beautiful tennis, when my movement and my technique come together I feel totally in balance on the court.

"In some ways I feel that I am playing tennis the traditional way, to be number one in the world with a one-handed backhand is something special.

"I like the history of the sport, that's why Wimbledon is my number one priority, with the white clothing and the tradition. It's what I grew up watching.

"I think my style can inspire a lot of kids. I always thought tennis should not be about waiting for your opponent to make a mistake, it should be about attacking and mixing up your game.

"I didn't always have the strength to play that way, but it came very quickly and when I was about 17 it took off like a rocket."

In little more than a year Federer has taken a vice-like grip of the men's game. Before his Wimbledon title in 2003 he was regarded as the most talented player on the circuit, but many questioned his self-belief.

After winning three of the four Grand Slams this year, the first man to do that since Mats Wilander in 1988, the question now is how long can he dominate the game.

"I only set short-term goals," said Federer, who said he was inspired to play tennis by Boris Becker.

"My goals this year were to retain my Wimbledon title, reach number one in the world and win the Olympics. I got two out of three but also achieved goals which I had not imagined."

Asked whether he could complete the calendar Grand Slam next year, Federer said: "I haven't been too far away this year, it's definitely possible. I guess you would have to ask the other guys if they think I can do it."

Comparisons with 14-times Grand Slam champion Pete Sampras are obvious, though Federer, full of respect for the American, says his motivation is not to emulate him.

"I'm impressed by him being ranked number one for six years, that shows how much effort he put into his career, but I guess that's why he is a little off the scene in tennis, he put everything, his whole heart into tennis.

"He can now look back and enjoy it and I hope one day I will have a similar moment but I think I will stay more involved in tennis."

There is little doubt what Federer's rivals think of him. Tim Henman, who he beat in the semi-final at Flushing Meadows on Saturday, summed it up.

"When he's playing like this you would need Agassi's returns, my volley, Hewitt's speed and Roddick's serve, then you might have a chance," he said.

Hewitt even thinks he can go on to better Sampras's record.

"He's definitely got a chance, the way his style is, he can play on any surface. He's taken it to a new level."