This season's FA Cup favourites Tottenham Hotspur were held to a 0-0 draw at third tier Stevenage Sunday but Liverpool laid their claim to be the real frontrunners with a 6-1 fifth-round thrashing of Brighton & Hove Albion.

Liverpool, whose win came thanks to an early Martin Skrtel goal, a neat Andy Carroll finish, three own goals and a late Luis Suarez header, next host last term's runners-up Stoke City in the quarter-finals after they prevailed 2-0 at Crawley Town. 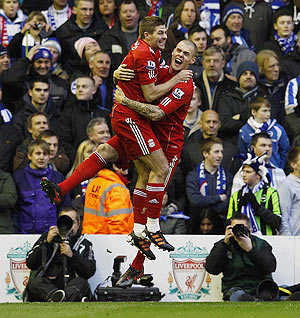 Spurs, third in the Premier League and with coach Harry Redknapp tipped to take over England, produced a lethargic display with three centre backs and had to settle for a replay at White Hart Lane next month.

Louis Saha had the ball in the net but his shot clipped an offside Scott Parker on the line to sum up a bad day for Spurs, the best-ranked team left in the Cup after holders Manchester City lost in an earlier round like Manchester United.

Gareth Bale had a superb shot tipped around the post by Stevenage goalkeeper Chris Day, a Spurs fan who started his career at the north London club.

"At the end of the game it got stretched and we were on the front foot. I think we did our homework, they had possession but we had a couple of chances," Day told ITV.

"(The replay) will be a long shot, it will be first time I've been down there this year without having to pay to get in," he joked.

Joel Byrom had two decent efforts for a hard-working Stevenage on a bumpy pitch and they now have the carrot of a home tie with Bolton Wanderers in the quarter-finals on March 17 or 18 to urge them on in the replay on March 7.

London's three big clubs have struggled in the fifth round with Arsenal being eliminated by Sunderland -- who next visit Everton -- and Chelsea scraping a 1-1 home draw with Birmingham City Saturday with Leicester City awaiting in the last eight.

Liam Bridcutt conspired to put into his own net twice on 44 and 71 minutes either side of striker Carroll, starting with Gerrard and Suarez for the first time, finishing with aplomb to silence critics of his lacklustre form.

A comical Lewis Dunk own goal and a close-range header from Suarez, who earlier missed a penalty having been included despite his non-handshake with Patrice Evra last week, completed the rout against his Uruguayan compatriot Gus Poyet's side.

Next opponents Stoke had a man harshly sent off early but then scored a controversial penalty as they saw off fourth division Crawley.

Jonathan Walters converted the 42nd-minute spotkick, after Ryan Shawcross had gone to ground having barely been touched by Kyle McFadzean, before Peter Crouch headed a second after halftime to end a personal goal drought.

Rory Delap was sent off in the 16th minute for a studs-up challenge, the kind of tackle which has prompted much debate in England this season with referees deeming them dangerous but players saying they are just trying to win the ball.

Stoke boss Tony Pulis, angered that Crawley manager Steve Evans had jumped on to the pitch to protest to referee Mike Jones, told ESPN he was "really irked" that there is such a discrepancy between tackles given reds and those that are not.

Crawley, who lost 1-0 at Manchester United at this stage last season when they were a non-league side, almost took an early lead when the ball hit Crouch and crashed against the woodwork. 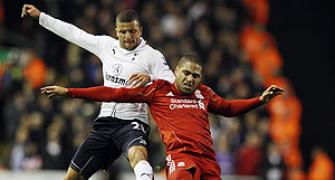 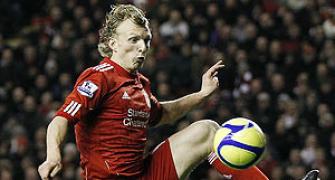