Photos from the football matches played in the Serie A, Bundesliga and French Ligue 1 on Sunday 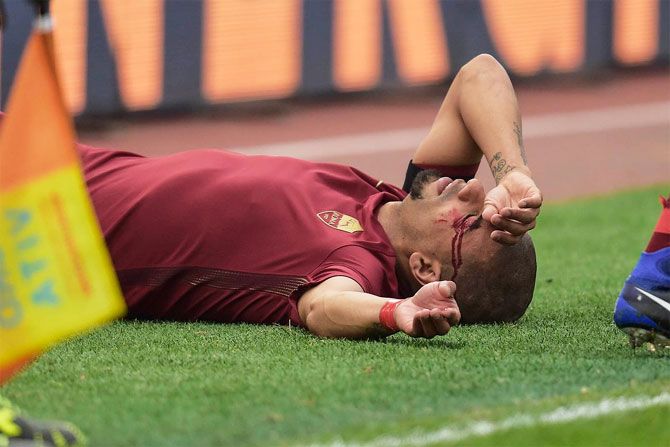 IMAGE: AS Roma full-back Emerson is left bloodied on the pitch during the ill-tempered Serie A derby match against SS Lazio at Olympic Stadium, Rome, on Sunday. Photograph: AS Roma/Twitter

AS Roma pounced on two dreadful Lazio mistakes to claim a 2-0 Serie A victory in a hot tempered derby boycotted by their own supporters on Sunday.

Lazio's Wallace gifted Roma the lead in the 64th minute when he tried to dribble his way out of defence but was dispossessed by Kevin Strootman who chipped the ball over helpless goalkeeper Federico Marchetti.

There was a scuffle involving players and officials from both teams after the goal, sparked when Strootman squirted water at Lazio substitute Danilo Cataldi who grabbed the Dutchman's shirt by the collar.

Strootman was booked and Cataldi shown a red card.

Roma doubled their advantage in the 77th minute when Radja Nainggolan caught Marchetti napping with a low shot from 35 metres that bounced twice as it entered the net at his unguarded near post.

There was also controversy in the first half when Roma's Bruno Peres appeared to be tripped on the edge of the penalty area by Lucas Biglia.

The referee initially awarded a free kick to Roma before pointing to the penalty spot. He then changed his mind again, reverting to his first decision.

Lazio, technically the home side in the Stadio Olimpico, have not won any of their last seven meetings against Roma, a run going back to the 2013 Italian Cup final.

"It’s a shame we lost like this because we contributed to it by gifting them two goals," said Lazio coach Simone Inzaghi. 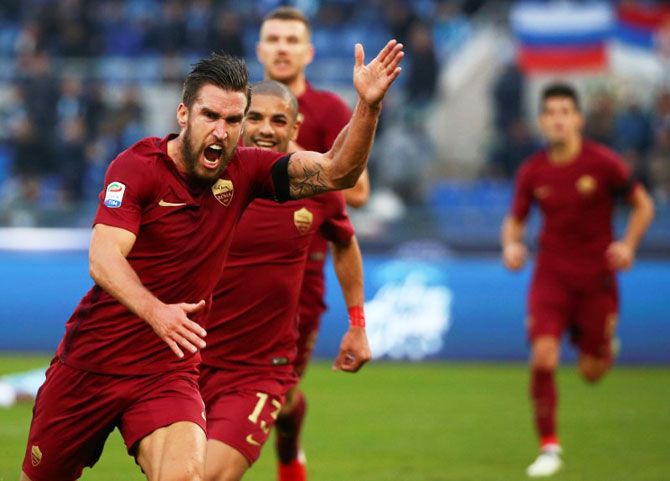 "It’s a huge disappointment. I know what the environment around a derby is like and there will be criticism."

The Curva Sud area was empty as Roma's hardcore supporters continued a long-running stay-away campaign in protest at security measures they say have destroyed their fan culture.

Roma stayed second in Serie A on 32 points, level with AC Milan and four behind leaders Juventus. Napoli, Lazio and Atalanta are eight points off the pace.

Milan needed a late goal from Gianluca Lapadula to beat second from bottom Crotone 2-1 after M'baye Niang had earlier missed a penalty for the home side.

Bottom club Palermo, where Eugenio Corini made his debut as their third coach of the season, slumped to their eighth successive league defeat when they lost 2-1 at Fiorentina, Khouma Babacar heading the winner deep into stoppage time.

Two first-half penalties, the first from Lorenzo Pellegrini and the second by Federico Ricci, helped Sassuolo to a 3-0 victory over Empoli that ended a nine-match winless run in all competitions.

Antonino Ragusa netted the third early in the second half.

Sampdoria beat Torino 2-0 with second-half goals from Edgar Barreto and Patrik Schick while Gianluca Caprari scored in stoppage time to give lowly Pescara a 1-1 draw at home to Cagliari.

The Sardinians went ahead through Marco Borriello in the 24th minute but had Davide Di Gennaro sent off 10 minutes later. 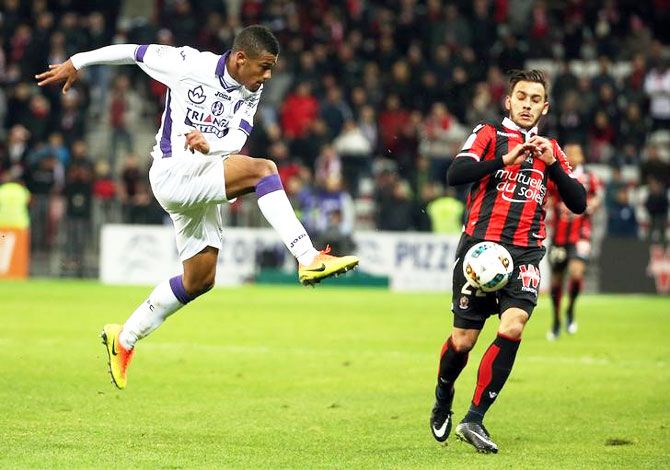 Nice restored their three-point lead at the top of Ligue 1 with a 3-0 win over Toulouse after producing another impressive performance on Sunday.

Despite the absence of the injured Mario Balotelli, the hosts scored twice in quick succession in the first half through Alassane Plea and Younes Belhanda before Jean Michel Seri put the result beyond doubt after the break.

Nice have 39 points from 16 games, three ahead of free-scoring Monaco who hammered Bastia 5-0 on Saturday.

Champions Paris St Germain are four points off the pace after losing 3-0 at Montpellier on Saturday, their first defeat by three goals in more than five years.

Stade Rennais moved up to fourth on 27 points thanks to a 2-0 home victory over St Etienne on Sunday.

Olympique Lyonnais slipped to sixth on 25 points after their game at Metz was abandoned on Saturday when firecrackers were thrown at visiting keeper Anthony Lopes.

At the Allianz Riviera, Plea collected Dante's through pass before firing the ball between keeper Alban Lafont's legs to give Nice a 23rd-minute lead.

Plea then headed a superb pass from Belhanda into the path of Seri who beat the keeper with a low shot in the 65th minute.

Toulouse are eighth on 22 points, one ahead of 10th-placed Olympique de Marseille who beat Nancy 3-0 on Sunday, scoring three goals for the first time this season.

Hamburg move off bottom after first win of the season 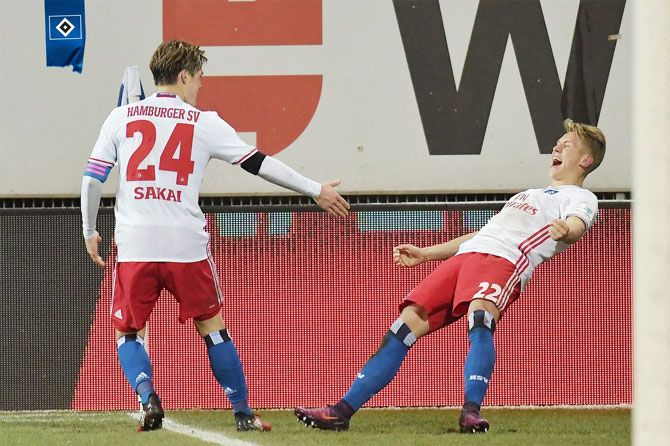 Hamburg SV claimed their first Bundesliga win of the season at the 13th attempt on Sunday as they won 2-0 at fellow strugglers Darmstadt.

The Dinos, the only ever-present team in the Bundesliga's 53-year history, also moved off the bottom of the table thanks to goals from Michael Gregoritsch and Matthias Ostrzolek.

Hamburg, who now have seven points, moved one point above Ingolstadt and one point behind Darmstadt, who are 16th and in the relegation playoff spot.

Gregoritsch missed two early chances as Hamburg took control of the match but made no mistake on the half-hour when he headed the opener from Filip Kostic's cross from the left.

The visitors continued to dominate but missed more chances and had to wait until the 90th minute to wrap up their win when Gotoku Sakai burst forward and fed Ostrzolek, who rifled the ball home.

It was a first-ever Bundesliga goal for the 26-year-old left back, who is in his sixth season in Germany's top-flight, having previously played for Augsburg before joining Hamburg in 2014.