Sparkling attacking football and goals from Jeremy Menez and Yohan Cabaye earned France a 2-0 win over Ukraine in their Euro 2012 Group D match on Friday after the game was halted for 55 minutes due to a thunderstorm.

Dutch referee Bjorn Kuipers took the players off the field in the fifth minute after thunder, lightning and torrential rain descended on the stadium and it was almost an hour before play resumed, with the surface having dried out remarkably quickly. 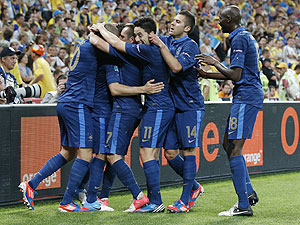 The win takes France to four points, one ahead of the co-hosts who failed to find the form that brought a 2-1 win over Sweden. England, who drew 1-1 with France in their opener, have one point ahead of their game with the Swedes later on Friday.

Despite the weather disruption, the match at the Donbass Arena started at a high-tempo as both teams attacked from the outset, with Ukraine urged on by a raucous, albeit drenched, home crowd.

Menez, brought into the France team for Florent Malouda, had an effort ruled out for a clear offside and then the pacy winger brought a brilliant save from Andriy Pyatov with a close-range strike from a low Franck Ribery cross.

At the other end, Ukraine striker Andriy Shevchenko, who scored twice in their opening win in Kiev, brought Hugo Lloris into action when he raced on to a long ball and fired at the near post but the keeper got down well to save.

Pyatov made another brilliant save in the 39th minute to tip over a powerful header from Philippe Mexes, who met a Samir Nasri free kick.

It was a pulsating first half and the high tempo resumed after the break with Menez again testing Pyatov at his near post in the 49th minute while seconds later Shevchenko cut in from the left and fired just wide of the top corner.

Menez was a constant threat and it was no surprise when he put France ahead in the 53rd minute, finishing off a brilliant counter-attack. Ribery burst down the left and Karim Benzema fed Menez who cut onto his left foot and fired home.

Benzema was the creator again minutes later when he turned and ran at the Ukraine defence, slipping a smart pass to Cabaye, who held off his marker in the area and made no mistake as he scored his first goal for his country.

With France dominant, Cabaye then struck the post with a fierce drive from outside the area while Ukraine ran out of steam and ideas.

The victory was the first for France in a tournament since their semi-final win over Portugal at the 2006 World Cup and leaves Ukraine still without a win in Donetsk.

© Copyright 2021 Reuters Limited. All rights reserved. Republication or redistribution of Reuters content, including by framing or similar means, is expressly prohibited without the prior written consent of Reuters. Reuters shall not be liable for any errors or delays in the content, or for any actions taken in reliance thereon.
Related News: Jeremy Menez, France, Ukraine, Yohan Cabaye, Andriy Pyatov
COMMENT
Print this article 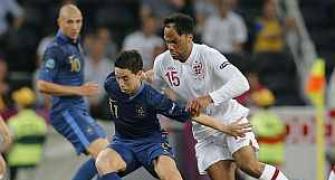 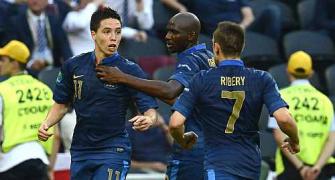 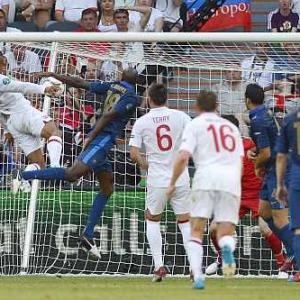 PHOTOS: England, France settle in with a draw