A look at the best goals from the Euro 2020 round of 16 matches played on Sunday. 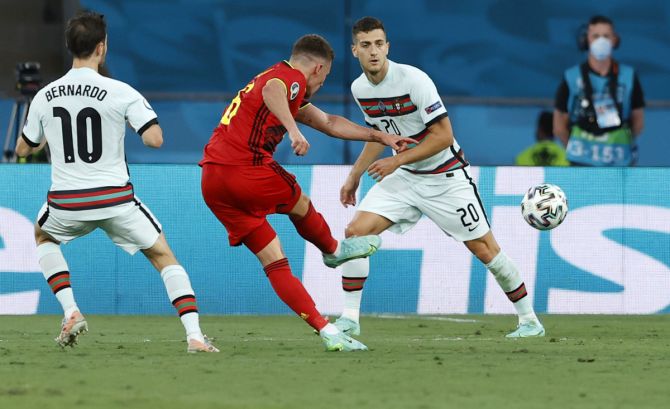 IMAGE: Thorgan Hazard scores the winner for Belgium against Portugal in the Euro 2020 round of 16 clash in Seville on Sunday. Photograph: Marcelo Del Pozo - Pool/Getty Images

A 43rd-minute strike from Thorgan Hazard helped Belgium beat defending champions Portugal with a 1-0 victory in the last 16 on Sunday.

Patricio stepped to the right in anticipation of a near post shot but was unable to get back across and was beaten by an effort that flew in centrally.

"In these kinds of games you have to grab your chances with both hands and voila, the goalkeeper expected me to choose the other corner, so the ball went in," said Hazard.

Incidentally, Hazard's fine goal was their only effort on target in the whole 90 minutes and there was little invention or flair from their midfield. IMAGE: Patrik Schick scored his fourth of the tournament to put the tie beyond the Dutch. Photograph: Marcelo Del Pozo - Pool/Getty Images

Czech Republic produced one of the surprise results at Euro 2020 after eliminating Netherlands with a 2-0 win in the round of 16 on Sunday.

Patrik Schick has proved that Euro 2020 is really his playground.

Schick scored his fourth of the tournament to put the tie beyond the Dutch. It came from a brilliant run from Tomas Holes, who seized a loose ball in midfield before bursting into the box. His cut-back was met by Schick who arrived on the run to slot it first time into the net with his strong left foot.

Holes outmuscled Georginio Wijnaldum and in the end it was way beyond Maarten Stekelenburg’s control.

With the win over Netherlands, the Czechs have emerged as Euro 2020’s dark horse. 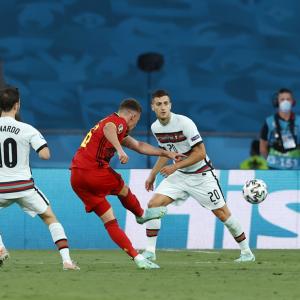