Ireland led the way on Friday as they and Croatia reeled off convincing away wins to move within reach of booking their places in the Euro 2012 soccer finals.

Ireland won 4-0 in Estonia in the first leg to erase memories of previous play-off disappointments while Croatia crushed Turkey 3-0 in Istanbul.

In the other play-off first legs, the Czech Republic overcame Montenegro 2-0 in Prague where Vaclav Pilar, after 63 minutes and Tomas Sivok, in added time, scored, while Bosnia and Portugal slugged out a goalless draw on a poor surface in Zenica where both sides missed chances.

Playing with great determination and purpose, Croatia exacted some revenge for their quarter-final defeat by the Turks in the 2008 finals as they dominated and silenced the home crowd.

Goals from Ivica Olic, Mario Mandzukic and Vedran Corluka stunned the Turks and left their coach Guus Hiddink hidden helpless in his dugout before an hour was up.

Ireland, seeking a place in a first major finals tournament since the 2002 World Cup, overcame Estonia in Tallinn thanks to a Keith Andrews header after 13 minutes and second-half strikes from Jon Walters and two from Robbie Keane, his second an 88th minute penalty.

By then, the home team were down to nine men having lost Andrei Stepanov, who was sent off after 34 minutes, and Raio Piiroja, after 77.

This left the Irish with a straightforward task in Tuesday's second leg in Dublin as they extended their unbeaten run to 10 games.

On a busy night of friendlies, Mario Balotelli justified his place as leader of Italy's attack by scoring their opening goal in a 2-0 win in Poland, co-hosts with Ukraine of next year's tournament.

Ukraine almost produced an upset, but after leading Germany 3-1 they had to settle for a 3-3 draw.

© Copyright 2021 Reuters Limited. All rights reserved. Republication or redistribution of Reuters content, including by framing or similar means, is expressly prohibited without the prior written consent of Reuters. Reuters shall not be liable for any errors or delays in the content, or for any actions taken in reliance thereon.
Related News: Croatia, Ireland, Vaclav Pilar, Robbie Keane, Vedran Corluka
COMMENT
Print this article 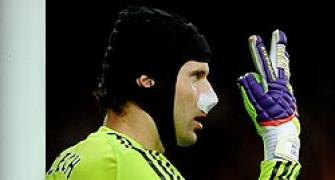 Cech's injury has Czechs worried ahead of Euro game 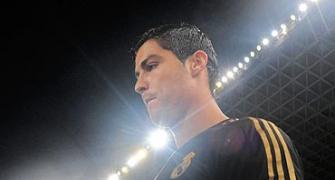 I am not mad, I am entertaining: Balotelli