Jose Mourinho was humiliated on his Premier League return to Stamford Bridge where his former side Chelsea routed Manchester United 4-0 on Sunday,

Having held out for 90 minutes at Anfield last Monday, United conceded the quickest goal in the Premier League this season to Pedro after 30 seconds and were then ripped apart as Gary Cahill (21), Eden Hazard (62) and N'Golo Kante (70) completed the scoring. Most of the goals stemmed from poor defending as Chelsea found ever more ingenious ways to inflict pain on Mourinho. Marcus Alonso began the unravelling with a defence-splitting pass that found Pedro, while Cahill could not believe his luck when the ball fell to him in the area after Chris Smalling failed to clear a corner. 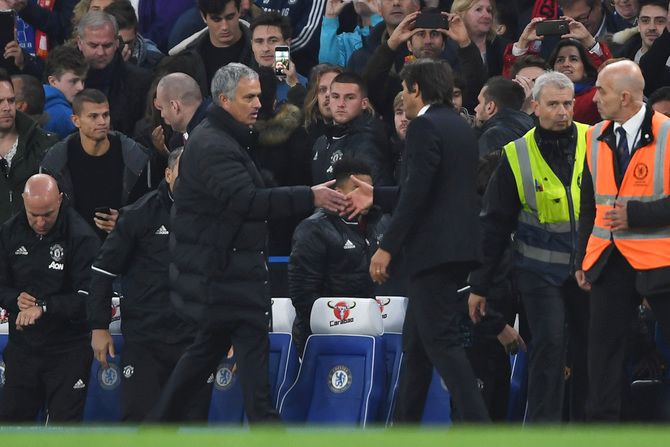 Two up at half time, when United replaced Marouane Fellaini with Juan Mata, Chelsea sat back and waited to hit United on the break with Hazard adding a third after a clever one-two and then Kante driving into the area unopposed to score his first goal for the club.

© Copyright 2021 Reuters Limited. All rights reserved. Republication or redistribution of Reuters content, including by framing or similar means, is expressly prohibited without the prior written consent of Reuters. Reuters shall not be liable for any errors or delays in the content, or for any actions taken in reliance thereon.
Related News: Manchester United, Jose Mourinho, Eden Hazard, Chelsea Antonio Conte, IMAGE
SHARE THIS STORYCOMMENT
Print this article