News
Business
Movies
Sports
Cricket
Get Ahead
Money Tips
Shopping
Sign in  |  Create a Rediffmail account
Rediff.com  » Sports » Mancini not looking at the table for another month

Mancini not looking at the table for another month

ManchesterCity manager Roberto Mancini understands better than most the cliches about title races not being over until the final minute of the season and is therefore refusing to look at the Premier League table.

-Toure, Tevez strike to give City glimmer of hope

In case he has missed it, his side lie 12 points behind leaders Manchester United after goals from Yaya Toure and Carlos Tevez gave them a 2-0 win over Chelsea on Sunday to keep alive their faint hopes of retaining their English crown.

Had they lost, the challenge of catching up with Alex Ferguson's men and stopping them winning a 20th league title could have been too much in Mancini's eyes. 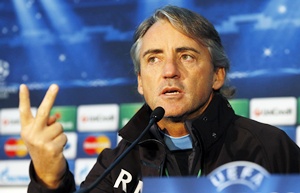 "Maybe," the Italian replied at a news conference when asked if a 15-point gap with 11 games left might have been a task too great.

"But I think football is finished when it's finished, the last minute of the last game. It is clear if we arrive with four games to go and United are 12 points (ahead) it's clear it is finished but our job is to continue to work."

Having secured the title in the dying seconds of the season on goal difference from United last term after making up eight points in six games, Mancini has plenty of reason for optimism even if he is choosing to avoid looking at reality.

"I think now it is not important to look at the table, only to continue to work like today, to play well, to improve because we can improve," he said.

Mancini opened his news conference by thanking Pope Benedict, who is abdicating, for his eight-year rule and the City manager could well be hoping for some divine intervention in the title run-in.

He will certainly be hoping for the type of attack-minded display City put in against Chelsea, who leave the Etihad Stadium more likely to be fighting for a top-four finish than the runners-up spot they would have been closer to with a win.

"Maybe we could have scored more goals," Mancini said, putting it mildly after a heap of missed opportunities by the likes of Jack Rodwell and Sergio Aguero.

They also owed a lot to goalkeeper Joe Hart, whose excellent save of a Frank Lampard penalty early in the second half was the catalyst for City to turn their chances into goals.

"It was important because maybe then the game could change (if Chelsea had scored)," Mancini said, adding he had nevertheless been disappointed that Hart had given the spot kick away in the first place by bringing down Demba Ba.

Chelsea manager Rafael Benitez was also holding on to the notion that anything can happen in football after his hopes of closing within a point of second-placed City stalled.

"(By) winning we would be closer but still it would be a fight until the end of the season," he said.

"We can not give up, we have to carry on pushing and try to win our games ... and hopefully if they lose some points we can be closer and if not we have to do our job."