Manchester United ushered in a new era under interim manager Ryan Giggs with a 4-0 Premier League win over Norwich City on Saturday full of the verve and attacking intent often absent under the sacked David Moyes.

The wheels came off Everton's charge for Champions League qualification in a 2-0 defeat at Southampton that left them a point behind fourth-placed Arsenal before United turned on the style to cheer Welshman Giggs in his unfamiliar new role.

A penalty and a superb curler from Wayne Rooney plus two close-range efforts from substitute Juan Mata were enough to see off a poor Norwich side and keep United seventh in the table, six points behind Tottenham Hotspur who won 1-0 at Stoke City.

Norwich are now just one point clear of 18th-placed Fulham, who were pegged back to 2-2 by visitors Hull City after Ashkan Dejagah scored a fantastic opener as the Londoners took a two-goal lead.

The best goal of the day, however, was scored by Swansea City's Jonjo Shelvey, who volleyed in from the centre circle in a 4-1 win over struggling Aston Villa, who are four points above Fulham.

West Bromwich Albion took a huge step towards safety with a nervy 1-0 home win over West Ham United thanks to Saido Berahino's 11th-minute goal that moved them five points clear of danger.

At Old Trafford, United winger Giggs was given a hero's welcome as he strode out from the tunnel in charge of the team, his presence offering frustrated fans hope for the future.

His starting selection was telling as he jettisoned Moyes signing Marouane Fellaini from the matchday squad and dropped Mata, another big-money Moyes acquisition, to the bench.

The optimism of the fans looked misplaced as United struggled to break Norwich down in the early exchanges with many familiar failings from the Moyes regime surfacing. 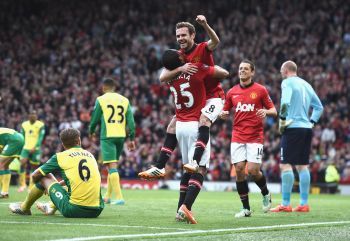 But once Rooney had fired them ahead from the penalty spot, after Danny Welbeck was hauled down four minutes before halftime, they never looked back.

Rooney drove powerfully in from the right and curled home a fantastic finish to double the lead three minutes after the break before Mata came off the bench and took his turn to shine.

He steered in Phil Jones's excellent cross from the right in the 64th and then nudged in Antonio Valencia's shot back across goal to make it 4-0 with 17 minutes remaining.

"For me it is a pleasure to play under this manager" Mata told Sky Sports. "When I was a kid I remember him playing and he is a proper Manchester United person.

"But the decision (of who the next manager is) is not down to us and we have to enjoy him being in charge."

Everton had benefited from three own goals and a penalty in their previous five Premier League matches, but the tables were turned on Saturday when they fell behind in less than a minute when Antolin Alcaraz dived to head into his own net.

Misfortune turned to calamity when Seamus Coleman steered another header past his own goalkeeper Tim Howard in the 31st.

A poor day at the office was compounded when referee Michael Oliver booked Everton's Leon Osman for diving in the second half when TV replays showed he was clearly tripped in the area.

The defeat was a setback to their Champions League hopes, said manager Roberto Martinez, who was unimpressed with his side's mistakes.

"Everything that could have gone wrong defensively, it did and that made it a very difficult game defensively from that point on," the Spaniard told BT Sport.

At the other end of the table, Fulham fans were singing "we're staying up" after Dejagah curled a superb finish into the top corner and Fernando Amorebieta's header put them 2-0 ahead, but a familiar feeling sunk in as Hull fought back.

Hull's January striker signings Nikica Jelavic and Shane Long both found the net in the final 15 minutes to set up a tense finale with the hosts hanging on for a point.

Swansea's clash with relegation battlers Aston Villa had little to recommend it on paper, but Shelvey's stunning strike was a goal of the season contender, a moment of inspiration executed with superb technique.

Wilfried Bony's opener for the hosts was cancelled out by Gabriel Agbonlahor's close-range strike before Shelvey took aim.

The midfielder controlled the ball in the centre circle and in one motion sent an arcing volley over rapidly back-tracking keeper Brad Guzan into the top corner before Swansea cruised home with further goals from Pablo Hernandez and a Bony penalty.

Spurs manager Tim Sherwood is widely expected to be replaced at the end of the season but a first-half header from Danny Rose, after good work from Emmanuel Adebayor, gave them a 10th away win this season, a haul not bettered in the division.

Tottenham are on track to qualify for the Europa League again and were helped on their way at Stoke by the 52nd-minute sending off of Ryan Shawcross, who showed his studs in an ugly challenge on Rose that drew a second yellow card.

West Brom are effectively a point from safety after holding on to beat West Ham with Berahino's strike. They are five points above third-bottom Fulham with a much better goal difference.

© Copyright 2021 Reuters Limited. All rights reserved. Republication or redistribution of Reuters content, including by framing or similar means, is expressly prohibited without the prior written consent of Reuters. Reuters shall not be liable for any errors or delays in the content, or for any actions taken in reliance thereon.
Related News: Southampton, Roberto Martinez, Everton, Fulham, Tottenham Hotspur
SHARE THIS STORYCOMMENT
Print this article 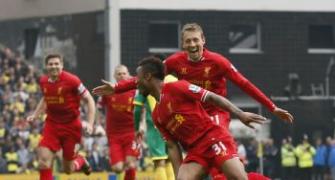 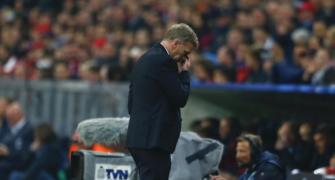 5 blunders that cost Moyes his job at Manchester United 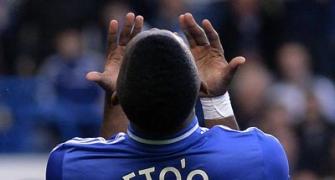 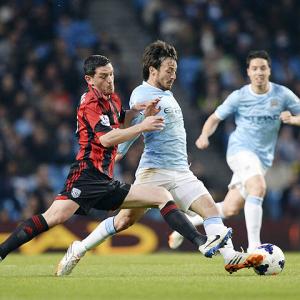 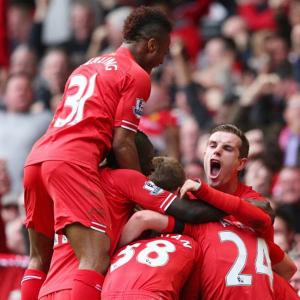