Arsenal scored three goals in the last five minutes to beat NorwichCity 3-1 and move third in the Premier League on Saturday while Everton won 2-0 at home to Queens Park Rangers to maintain their faint top-four aspirations.

Norwich's Michael Turner opened the scoring and looked to have set up a shock victory at the Emirates Stadium before Mikel Arteta levelled from the penalty spot, Olivier Giroud slid in from close range and Lukas Podolski put the result beyond doubt. 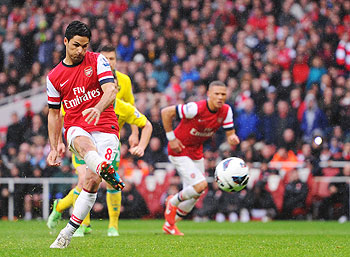 Arsenal are now one point clear of London rivals Chelsea and Tottenham Hotspur in fourth and fifth and four ahead of Everton in sixth who had Darron Gibson and Victor Anichebe to thank for their win over QPR.

QPR stay seven points adrift of safety in 19th, level on points with Reading who earned a point with a 0-0 draw at home to Liverpool.

Aston Villa drew 1-1 with Fulham to move three points clear of the relegation zone, but having played two games more than 18th place Wigan Athletic, while Southampton and West Ham United also shared the spoils in a 1-1 draw.

Arsenal began the day in fifth but looked on course to suffer a demoralising defeat when Turner headed in an inswinging freekick from Robert Snodgrass after 56 minutes.

They were handed a route back into the match in the 85th minute when the linesman spotted a tug by Norwich's Kei Kamara on Olivier Giroud from a corner and Arteta stepped up to slam the penalty high into the net.

With the momentum behind them, Arsenal took the lead three minutes later as Alex Oxlade-Chamberlain drove to the dead-ball line and cut it back for Giroud to slide home with the help of a deflection off Norwich's Sebastien Bassong.

Podolski offered the coup de grace in injury time, hammering in a low-shot from outside the penalty area.

"Anything could happen because we had to throw everyone forward," manager Arsene Wenger told Sky Sports. "In the end, our fantastic spirit got us there."

After a difficult start to the season when their top-four hopes were largely written off, Arsenal have now taken 25 points from 30. Apart from a home clash with Manchester United, they look to have a favourable run in compared to their rivals.

QPR's unlikely hopes of staving off relegation were dealt a blow by an Everton side still entertaining an implausible late charge into the top four.

Everton took the lead in the 40th minute when a Gibson shot from distance took a wicked deflection of QPR's Clint Hill and beat Julio Cesar in goal for the Premier League strugglers.

The home team effectively ended the contest when Anichebe latched on to a knockdown from Sylvain Distin to flick home 11 minutes after the restart. Everton are now unbeaten in their last five league games.

Bottom club Reading withstood a Liverpool barrage but held on for a point thanks in a large part to keeper Alex McCarthy who was in inspired form.

If Liverpool lacked a cutting edge, their 35 million pounds striker Andy Carroll, on loan at West Ham United, found the net with a deflected free kick to cancel out Gaston Ramirez's opener for Southampton.

At Villa Park, the home team took the lead 10 minutes after the restart when forward Andreas Weimann cut the ball back for Charles N'Zogbia who curled into the top corner, before Fulham levelled when Fabian Delph put through his own net.

© Copyright 2021 Reuters Limited. All rights reserved. Republication or redistribution of Reuters content, including by framing or similar means, is expressly prohibited without the prior written consent of Reuters. Reuters shall not be liable for any errors or delays in the content, or for any actions taken in reliance thereon.
Related News: Queens Park Rangers, Everton, Norwich, Fulham, Olivier Giroud
SHARE THIS STORYCOMMENT
Print this article 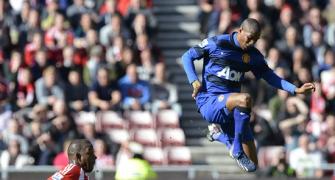 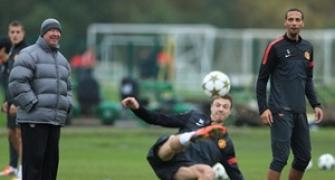 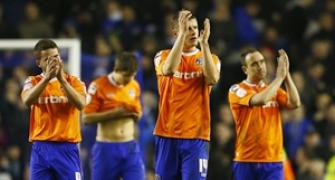 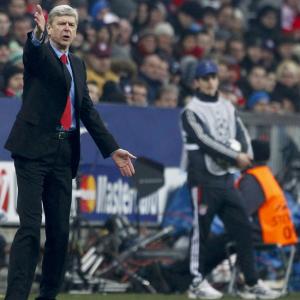 Photos: Wenger hurt by Arsenal exit but proud of win