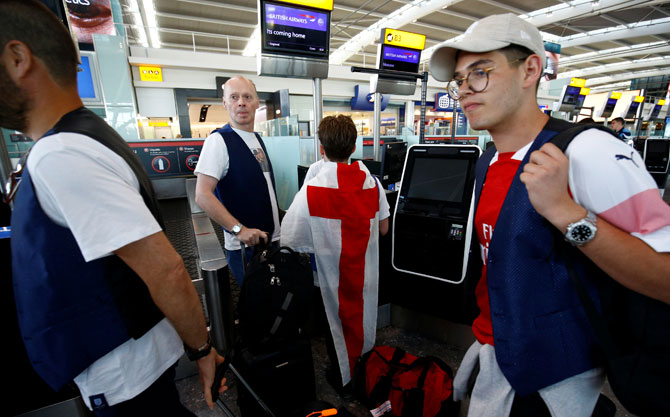 IMAGE: England football fans prepare to depart to Moscow for England's semi-final at the World Cup at Heathrow Airport in London on Tuesday. Photograph: Henry Nicholls/Reuters

England have not been in the semi-finals of the World Cup since 1990 when they lost on penalties to then West Germany. But when England face Croatia in Russia on Wednesday, there may only be only a few thousand England supporters present.

Moscow's Luzhniki Stadium, where the match is being played, has a capacity of 80,000, so a few thousand England supporters will find themselves heavily outnumbered by Croatian fans as well as Russians who are expected to be in the majority.

With their own bitter memories of past semi-final defeats in the soccer tournament, England and Croatia will be competing for a spot in Sunday's final against France.

But the dearth of England supporters means chants of soccer anthem "Three Lions" and its catchy chorus "it's coming home" may be hard to discern in Moscow despite a last-minute dash to the Russian capital by some supporters.

"It's a bit slow at the moment," said Paul Turner from Manchester, sporting a red England jersey in central Moscow.

"We had expected more fans around and a few more bars open, but it's a bit quiet still," he added, speaking on the morning of the game.

Fears of violence and racism ahead of the World Cup, bolstered by memories of clashes between England and Russia fans Marseille during the European Championship in France in 2016, may have put supporters off travel to Russia for the tournament.

Numbers have also seemingly been kept down by diplomatic tensions over the poisoning of a Russian former double-agent and his daughter in Salisbury in March, and now the death of a woman who police say was poisoned with the same nerve agent.

"We've been having a really good time so far... You feel really safe and secure, as opposed to before we came out, nobody knew what to expect. That's why there haven't been many England fans here," said Mark Jowsey, 46, a butcher from Newcastle.

"Moscow is one of the best places I have ever been," he added.

Reassured by positive reports from the tournament and inspired by the unexpected progress of their team, some England fans have raced to Russia in recent days, with extra match tickets released by organisers FIFA and additional seats provided on Moscow-bound flights from Britain.

But initial signs suggest it hasn't been enough to make a big difference to the game's attendance.

"(It's) because of the cost I think, the costs of flights and things like that. It's hard on the FIFA website to get tickets. It kept crashing. I was trying and trying for hours. It was a nightmare," Turner, the fan from Manchester, said.

Victoria Lopyreva, an official ambassador for the World Cup and a former Miss Russia, called on Britons on Monday to come to Moscow for the match.

"I want to say to English fans: 'Guys, get it together, come to Russia and support your national team because they have got into the semi-final'," Lopyreva said.

© Copyright 2020 Reuters Limited. All rights reserved. Republication or redistribution of Reuters content, including by framing or similar means, is expressly prohibited without the prior written consent of Reuters. Reuters shall not be liable for any errors or delays in the content, or for any actions taken in reliance thereon.
Related News: England, FIFA, Miss Russia, Moscow, Victoria Lopyreva
SHARE THIS STORYCOMMENT
Print this article 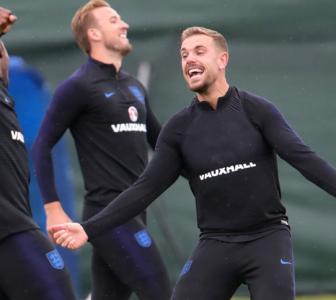 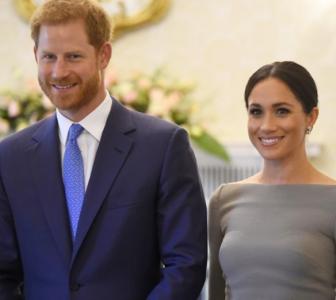