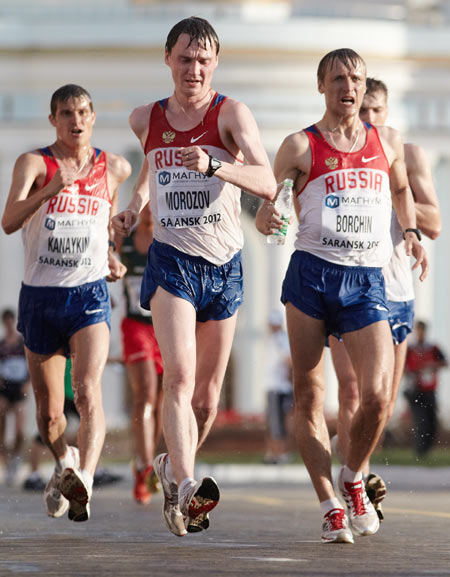 "The Russian Anti-Doping Agency RUSADA after meeting with its Disciplinary Committee has decided to ban five sportsmen for taking banned substances," it said in a statement.

"The breaking of anti-doping rules was due to abnormal blood levels in their biological passports, which belong to the International Association of Athletics Federations."

Borchin, 28, has been suspended for eight years backdated to Oct. 15 2012, although he had already retired from competition.

Kirdyapkin won gold in the men's 50km walk at the 2012 London Games, while Kaniskina took silver in the women's 20km race following the gold she claimed in Beijing in 2008. The length of Kirdyapkin's ban means he will be eligible to defend his title at the 2016 Rio Olympics.

Borchin, who won the men's 20km walk in Beijing, had previously been banned for a doping offence. In 2005, he tested positive for ephedrine and was suspended for one year.

Minister for Sport Vitaly Mutko was furious after the latest bans for Russian walkers, with 25 having been suspended for doping offences in the last six years according to local media. "We've already told the Russian Athletics Federation (VFLA) more than once to get their house in order and clean up their act," he said on his department's website (www.minsport.gov.ru). "It's turning out that the VFLA is not keeping in tune with our state anti-doping policy, which we have done a lot to try and get off the ground." "After everything that has happened, it is impossible not to see the need to talk to the VFLA about the recommendation so they now start to think clearly about making personnel and structural changes within the national teams of the country."

The five athletes also had results annulled for various periods, which has not affected any Olympic medals, but five world golds from 2009 and 2011 could be re-awarded.

Olympic champion Kirdyapkin and runner-up Kaniskina can therefore keep their London Games medals, while Borchin will be able to hold onto his gold from Beijing.

Kaniskina, who turned 30 on Monday, and Borchin both retired from competition in November 2013. Kaniskina became the director of the Olympic Walking Training Center in Mordovia earlier this month. She took over from Viktor Kolesnikov, who was disqualified for four years for breaking anti-doping regulations.

Image: Vladimir Kanaykin, Sergey Morozov, Valery Borchin and Andrey Krivov of Russia in action during the competition of men's 20km IAAF World Race Walking Cup on May 12, 2012 in Saransk, Russia

© Copyright 2020 Reuters Limited. All rights reserved. Republication or redistribution of Reuters content, including by framing or similar means, is expressly prohibited without the prior written consent of Reuters. Reuters shall not be liable for any errors or delays in the content, or for any actions taken in reliance thereon.
Related News: RUSADA, Valery Borchin, Olga Kaniskina, VFLA, Sergei Kirdyapkin
SHARE THIS STORYCOMMENT
Print this article