A Delhi Commonwealth Games gold medalist and a cadet of Tata Archery Academy, Deepika eclipsed the previous best of 330 points out of 360, set up by Chekrovolu Swuro (SPSB) at the 32nd Sahara Senior National Recurve and Compound Championship at the same venue here in January 2012, by scoring 333 points out of maximum 360 in the 70 meter distance.

She also shattered the previous record of Olympian L Bombayla Devi's (RSPB) 345 out of 360 points record by scoring 346 points in the 60 meter distance.

In the men's 90 meter and 70 meters, Rai hit the bull's eye to earn 323 and 339 points respectively to emerge victorious. 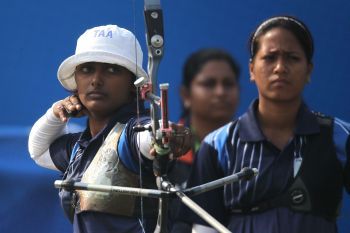 In the men's 90 meters, Rai was followed by his team-mate Viswash, who accumulated 320 points, and Atanu Das (PSPB) finished third with 320 points.

Ajay (Delhi) gave Rai a tough fight in the 70 meters event and finished a close second with 338 points while Jayanta Talukdar was third with 334 points.

Praneetha earned 326 points from a maximum 360 points while Reena Kumari of Jharkhand finished third with 319 points.

In the women's 60 meter event, Deepika was followed by her team-mate Asha Rani Horo, who scored 331. Praneetha had to settle with the bronze medal with 329 points.

Mondol, who scored 339 points in the event to bag the gold, was trailed by Talukdar (339 points) while Sanjay Boro (Assam) was third with 336 points.

Jharkhand's international archer Jhano Hansda and Delhi's Abhishek Verma topped the points chart in the women's and men's compound sections respectively in the championship that kicked off at the main JRD Sports Complex on Monday.

Hansdah scored highest with 689 points out of 720 to emerge winners in 50 meters event. Hansdah had to sweat it out as her Manipuri opponent P Lily Chanu put up a stiff challenge but fell one short of her opponent. 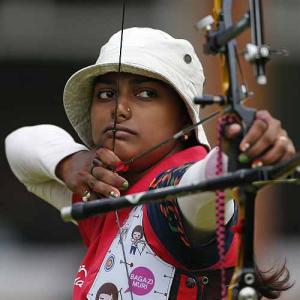 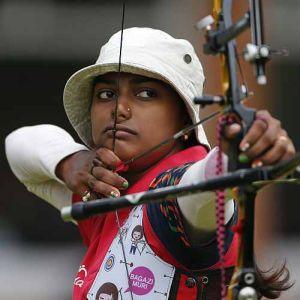