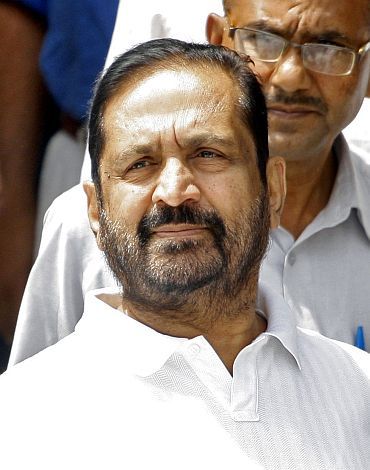 Another tainted official Abhay Singh Chautala was also made the Life President by the IOA.

Before Kalmadi and Chautala, only Vijay Kumar Malhotra, who served as acting IOA chief between 2011 and 2012, was made the Life President, according to IOA's official website.

Kalmadi served as IOA president from 1996 to 2011 and was jailed for 10 months for his involvement in the 2010 Delhi Commonwealth Games corruption scandal but later released on bail.

The Pune-born administrator, also a former Congress Member of Parliament, was a powerful sports officials in his heydays. He was the president of Asian Athletics Association for 13 years from 2000 to 2013. He was last year made Life President of the Asian athletics body last year.

Kalmadi, now 72, was also a member of the powerful ruling council of the International Athletics Federation (IAAF) from 2001 to 2013.

Chautala served as the president of Indian Olympic Association from December 2012 to February 2014 when the IOA was suspended by the parent International Olympic Committee for fielding charge-sheeted candidates at the elections. His election as IOA chief was annulled by the IOC.

Only after the IOA Constitution was amended to ensure that charge-framed candidates are not allowed to contest elections, the IOC revoked the suspension on IOA in February 2014.

Chautala had served as president of erstwhile Indian Amateur Boxing Federation which was terminated from recognition in the world body AIBA in 2013 for possible manipulation in IABF elections.

Recently, he was elected as president of one rival faction of the Haryana Olympic Association, which was reportedly given recognition by the IOA.