Harminder Singh on Saturday became the first Indian to win a medal in a walk race in the history of the Commonwealth Games, a day after Kavita Raut won the first-ever women's track medal, but their compatriots disappointed in other athletics events.

The 26-yer-old walker from Patiala won a surprise bronze in the men's 20km road event to give the country its second athletics medal in these Games, while also clocking his personal best  of 1 hour, 23 minutes and 27 seconds.

Talent had won a bronze in 2008 Beijing Olympics while Adams was a silver medallist at the 2006 the Melbourne Commonwealth Games.

Harminder was narrowly off Babu Bhai Panucha's national mark of 1:23.06. Panucha, incidentally, did not finish the walk while another Indian Baljinder Singh was ninth with a timing of 1:29.18.

With Harminder's medal, India has won two bronze in athletics with Kavita Raut having finished third in the women's 10,000m race on Friday. 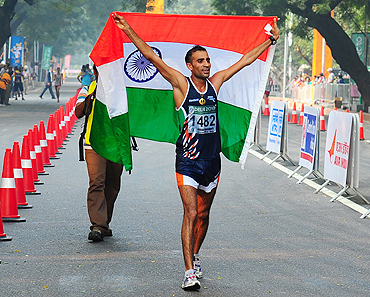 In women's 20km race walk, however, Rani Yadav finished sixth clocking a time of 1:42.54 while K J Sandhya was eighth with a timing of 1:51.44. L Deepmala Devi did not complete the race.

England's Jo Jackson won gold with a timing of 1:34.22 which was also a Games record time, to win her country's first yellow metal in this event. Claire Tallent of Australia won the silver in 1:36.55 while Kenyan Grace Njue bagged the bronze (1:37.49).

In the evening, other Indians could not emulate Harminder's feat on the fourth day of the track and field events even though the showpiece venue Jawaharlal Nehru Stadium was thronged by nearly 40,000 spectators, the biggest so far.

In the women's shot put final, Manpreet Kaur and Patwant Kaur finished a distant ninth and 11th in the 12-athlete field. Manpreet threw a distance of 14.50m while Patwant cleared 12.63m.

Another Games record was created when South African Sunette Viljoen won the women's javelin throw by throwing the spear to the 62.34m mark, bettering her own record of 60.72m, which he set in Melbourne four years ago.

Australia's Kim Mickle (60.90m) won the silver while another South African Justin Robbeson bagged the bronze with an effort of 60.03m.

India's Saraswathi Sundaram and Suman Devi finished a lowly eighth and ninth respectively despite setting their season's best of 51.51m and 51.19m.

The best Indian performance in this session came from Sudha Singh who finished fifth in women's 3,000m steeplechase by setting a new national record of 9:57.63. She erased the earlier mark of 10:03.05 standing in the name of Jaisha.

Jaisha flopped along with Priyanka Patel by bringing up the rear to finish eighth and ninth in a slow 10:20.83 and 10:26.48 respectively.

Mercy Njoroge and Gladys Kipkemoi bagged silver and bronze respectively in 9:41.54 and 9:52.51.

In men's discus throw, national record holder Vikas Gowda finished second by clearing 60.83m to qualify for the finals while Anil Kumar fell by the wayside after ending at 13th with a disappointing 47.68m effort.

Season's leader among Commonwealth discus throwers, Australian Benn Harradine, who finished second in IAAF/VTB Continental Cup in Croatia last month, emerged winner in the qualification round with an effort of 61.98m.

In women's 200m, Satti Geetha ran her season's best of 23.99secs to finish third in a round one heat and qualify for the second round.

In men's 200m, India's Dharambir ran his personal best of 21.20secs but still failed to qualify for the semi-finals after finishing sixth in one of the round two heats. The other Indian in the fray, Mohd Abdul Qureshi was disqualified for false start in a round one heat.

In women's long jump, all the three Indians -- Maliakkal Prajusha, Mayookha Johny and Resmi Bose  qualified for the finals with efforts of 6.31m, 6.27m and 6.12m respectively.

In men's 400m hurdles, both the Indians in the fray -- national record holder Joseph Abraham and Kuldev Singh -- failed to qualify with both finishing fourth in their respective heats. Abraham clocked 50.55secs, below his season's best of 50.24secs and national mark of 49.52secs.

Both their women counterparts also could not qualify for the finals after finishing fifth in their respective heats. Jauna Murmu clocked 59.86secs while Ashwini Akkunji timed 59.49 secs. 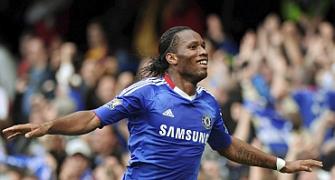 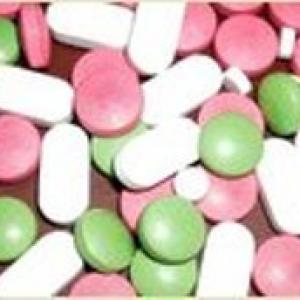