Embattled Suresh Kalmadi was sacked as the Chairman of the Commonwealth Games Organising Committee in the interest of an impartial probe, bringing an abrupt and unceremonious end to his tenure which was plagued by scandals and controversies.

Kalmadi's close aide Lalit Bhanot was also removed as the Secretary General of the OC with immediate effect, almost three months after the sporting extravanga was held here amid a spate of unsavoury controversies.

The decision to remove the two top officials was taken by the new Sports Minister Ajay Maken after taking legal opinion from the the Attorney General.

Maken, who took charge of the Ministry barely five days ago, said that both Kalmadi and Bhanot have been removed in light of the ongoing investigation by the Central Bureau of Investigation (CBI) over allegations of corruption and irregularities in organisation and conduct of Commonwealth Games.

"In the light of the concerns expressed by the CBI and in the interest of impartial and unhindered investigations, it has been decided to remove Kalmadi from the position of the Chairman of the Organizing Committee and the position of Chairman, Executive Board of the organizing, CWG, with immediate effect", Maken said. 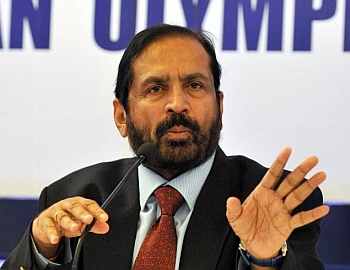 Kalmadi has been directed to handover charge to Jarnail Singh, Chief Executive Officer of the Organizing Committee, who is also a Member of the OC's Executive Board, he said.

Both Kalmadi and Bhanot had refused to quit when the scandals had broken out in the run-up to the mega event, maintaining that they had not done anything wrong.

Maken said that he had been discussing the issue with the Attorney General since the past few days.

"After a series of discussions with the AG in past few days, we took this decision. This morning, we had a meeting with the Attorney General and he advised us that we can go ahead with the removal. So, accordingly we removed both the officials", he said.

"CBI had asked for the removal of Kalmadi and others in connection with the Games. CBI, during its investigation, made some strong observations against Kalmadi", Maken said.

The Kalmadi-led Organising Committee has also been accused by Australian and British companies of delaying payments to them for services rendered during the October 3 to 14 event.

Maken had given a ten-day ultimatum to the government nominees in the Organising Committee to sort out the payment disputes and ensure that all the legitimate bills are cleared.

Shortly after the scandal-hit Games came to an end, Central Vigilance Commission and Central Bureau of Investigations (CBI) started its probe in the Commonwealth Games.

The Prime Minister Manmohan Singh also constituted a high-level committee headed by V K Shunglu to probe CWG corruption allegations and asked it to give its report within three months.

Till date, the CBI has registered four FIRs naming some of the close aides of OC chairman Kalmadi for alleged criminal conspiracy and financial irregularities in executing certain contracts.

The CBI had also questioned both Kalmadi and his aide Bhanot and had raided their offices and residences in connection with the probe.