Crowd buzz missing as players grind it out at Aus Open 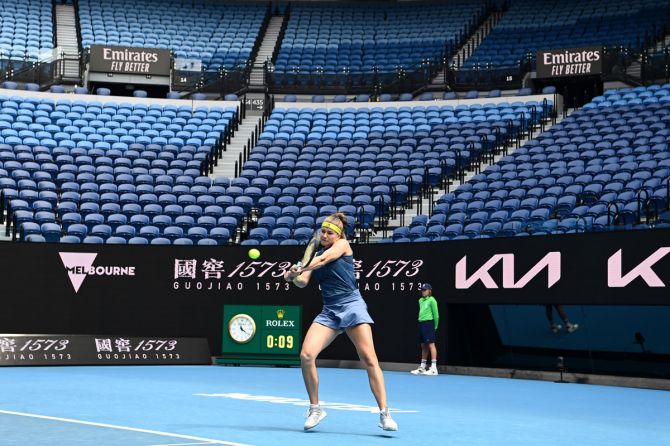 IMAGE: Karolina Muchova plays a backhand during her third round match against Karolina Pliskova against the backdrop of empty stands at the Australian Open on Saturday. Photograph: Quinn Rooney/Getty Images

Australia's second most populous state Victoria entered a five-day lockdown on Saturday as authorities raced to prevent a third wave of COVID-19 cases sparked by the highly infections UK variant.

One new locally acquired case was confirmed in the past 24 hours, health authorities said on Saturday, taking the number of cases tied to a quarantine hotel at Melbourne airport to 14 and total active cases in the state to 20.

"A lot of people will be hurting today. This is not the position Victorians wanted to be in but I can't have a situation where in two weeks' time, we look back and wish we had taken these decisions now," Victoria Premier Daniel Andrews told reporters on Saturday.

International flights to Melbourne will be stopped through Wednesday, after five en-route, with about 100 passengers, land on Saturday.

All 14 cases in the airport cluster are due to the highly infectious UK variant of the novel coronavirus. So far only direct contacts of workers at the hotel have tested positive.

"It's contained in that sense. There is concern in Victoria about spread into the community," Australia's Chief Medical Officer Paul Kelly told reporters.

Streets in downtown Melbourne, the state's capital, and its suburbs were almost empty on Saturday, with people ordered to stay home for all but essential shopping, two hours of outdoor exercise, caregiving, or work that cannot be done from home.

Among the "essential" work, play at the Australian Open, the year's first Grand Slam tennis event which runs to February 21, continued, but fans were banned through Wednesday. Thousands were forced to leave mid-matches before midnight on Friday. "It was a bit disturbing - in some ways sad. ... I just tried to focus on my game," Elina Svitolina said after winning her third-round match.

The lockdown, which has shut restaurants and cafes for all but takeaway, hit just as Melbourne had geared up for the biggest weekend in nearly a year, with Lunar New Year celebrations, Valentine's Day and Australian Open crowds.

Melbourne last year endured a 111-day lockdown, one of the strictest and longest in the world at the time, to stem a coronavirus outbreak which lead to more than 800 deaths.

"It's the busiest weekend of the year for us. I'm sitting here making 178 heartbreaking phone calls to see if I can get them to rebook," said Will Baa, owner of Lover, a restaurant in the hip district of Windsor.

"Just fingers crossed that it only does extend for the short period of five days," he said.

More broadly, Australia is rated among the world's most successful countries in tackling the pandemic, largely because of decisive lockdowns and borders sealed to all but a trickle of travellers. With a population of 25 million, there have been around 22,200 community cases and 909 deaths.

New Zealand on Saturday reported one death of a patient with COVID-19. That case has yet to be included in the country's total of 25 COVID-19 deaths.

© Copyright 2021 Reuters Limited. All rights reserved. Republication or redistribution of Reuters content, including by framing or similar means, is expressly prohibited without the prior written consent of Reuters. Reuters shall not be liable for any errors or delays in the content, or for any actions taken in reliance thereon.
Related News: Melbourne, Getty Images, IMAGE, Rod Laver Arena, Quinn
SHARE THIS STORYCOMMENT
Print this article 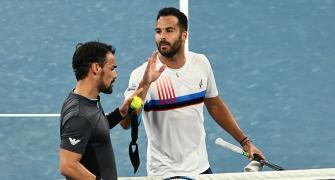 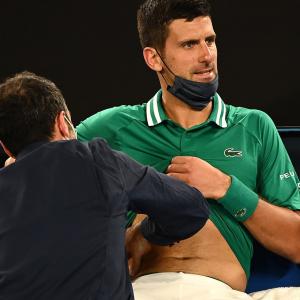 Djokovic unsure whether he will continue at Aus Open 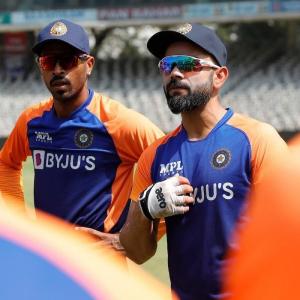