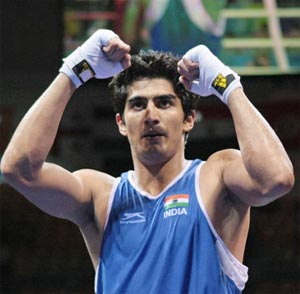 He has been picked for both the Commonwealth and the Asian Games but Olympic bronze medallist Vijender Singh on Tuesday said he is still unhappy with the way selection trials for the two events were conducted as some "deserving" boxers have been left out.

"I am not happy with the way trials were done. International referees and judges were brought and it seemed like a tournament but what is the point of doing all this when the boxers are not even told their scores," the middle weight 75kg pugilist said from Patiala after the squads for the October 3 to 14 Commonwealth Games and the November 12 to 27 Asian Games was announced.

Vijender said among those who were not picked despite a fine show in the trials include his cousin Balwinder Beniwal (64kg), a youth Commonwealth Games gold-medallist, and reigning national champion Sunil Kumar (49kg), who also happens to be a former Commonwealth champion.

"They fought well but I don't know for what reason they were ignored. The trials were held behind closed doors and nobody knew how the scoring went because nobody told us. The scores were not declared, none of the competing boxers were told which one of them won. It was very disappointing," he said.

"Some deserving names have been left out. Sunil, Balwinder and some other boys deserved to get a look in but were ignored," he added.

Asked about Vijender's allegations, Indian Boxing Federation Secretary General P K Muralidharan Raja insisted that the trials were conducted transparently and only deserving boxers have been given the nod.

"I have spoken to him about this and explained to him that Balwinder was clearly beaten during the trials. We cannot ignore performances. I can understand his disappointment but the selection committee has been fair in its assessment," he said.

The world number one, meanwhile, said he is looking forward to spearheading the Indian challenge in both the Games.

"I have become immune to pressure now. In fact, I enjoy it when the spotlight is on me. I am looking forward to getting gold medals in both the Commonwealth Games and the Asian Games," he said.

Vijender was a silver medallist at the last Commonwealth Games in Melbourne and settled for a bronze in the previous Asian Games in Doha.