The opening ceremony of the Delhi Commonwealth Games, at the Jawaharlal Nehru stadium, on October 3, will have a spiritual touch. Azaan, Vedic and Buddhist chants will be  played in the background as performers, wearing costumes depicting different aspects of the pluralist character of India, present the theme song Swagatan in different Indian languages.

The music, approved by the Group of Ministers (GoM), headed by S Jaipal Reddy, incorporates Hindustani, Carnatic and Quwwaali styles. 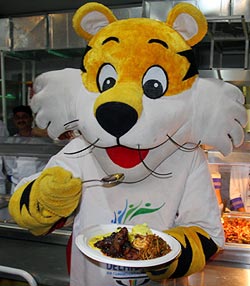 The opening ceremony, which will begin with the National anthem, will feature the 'Great Indian Journey', split into three segments -- Human Train, Gandhi and Celebration.

The Human Train segment will present "the confluence of all aspects of rural India", while the Aerostat will show sights visible from the window of a train while travelling through rural India.

A flute recital of Gandhi's hymn Vaishanv Jan To and folk dances by some 800 performers on the rendering of a composition of Kabir are other highlights of the opening ceremony okayed by the GoM, which wanted better presentation of Kabir's couplet (Doha) as it found phonetic clarity lacking.

Yet another incorporation at the instance of the GoM will be a stanza from the tenth Sikh Guru Gobind Singh's Koi bole Ram, koi Khudai.

Bharat Bala, the creative head for the opening and closing ceremonies, made a presentation to the GoM at the last meeting, on behalf of the Games' organising committee, and assured to incorporate the suggested changes.

The closing ceremony, again in the same stadium on October 14, will end with Vande Matram being played, as 2000 children perform on the ground. Its highlight will be a presentation of Indian martial arts, like Malkhambh of Maharashtra and Gatka of Punjab.

The organisers had a tough time getting the security agencies' clearance as the show includes use of sticks, swords and fire.

All athletes from the participating countries will come together at the closing ceremony to depict Vasudhaiva Kutumbakam (world is a family), while the last item on the agenda before Vande Matram will be a 30-minute "music of universal love", having segments from folk, sufi, popular and world music.

Bollywood stars like Shah Rukh Khan, Katrina Kaif and Kareena Kapoor among others have been approached to perform in this part of the ceremony. The GoM is, however, yet to clear names of the film personalities sought to be inducted as crowd pullers.

There was a bit of controversy at the GoM meeting over the rendition of Vande Matram in its modern style, as produced by Bharat Bala and sung by A R Rahman in the late 1990s, that became an instant chartbuster.

The GoM decided that the "contemporary" version may hurt people's sentiments as it is a national song and would be better not to deviate from the original version.

The possibility of rain spoiling the opening ceremony continued to haunt the GoM at its meeting on Wednesday because Viraf Sarkari of Wizcraft, the event managers, insisted that several segments would have to be cancelled or scaled down if rain continues.

"If the rain continues further, it would not be possible to build any stage and all the flying scenes would have to be dropped. Only ground-based choreography would be presented. It may also be difficult to present the different installations of the Great Indian Journey," sources quoted Sarkari as telling the GoM.

He even indicated difficulty in hoisting the Aerostat if the weather worsens.

The rehearsals that had were to start at the venue from September 1 have been deferred to September 22 because of the heavy rain in the capital and, hence, Sarkari, has pleaded with the GoM to allow the rehearsals up to October 2, just a day before the Games open. The security agencies are, however, not inclined to extend the deadline of September 30.

Meanwhile, the India Meteorological Department is bracing for three-hourly weather forecasts in Delhi during the Games. It has been issuing such forecasts for long for the aviation sector and space launches.

These will cover temperature, humidity, rain or thunderstorms as well as wind conditions -- factors that could affect Games. 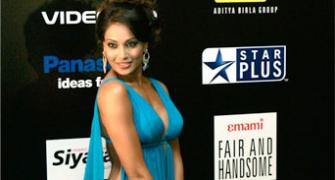 'Rahul Gandhi's heart is in the right place'