Athletics powerhouse Jamaica named an understrength 46-member squad sans some of the biggest stars in the world, including top sprinters, for next month's Commonwealth Games in India.

In the men's 100m race, Lerone Clarke and Oshane Baily, who both have more than 10 seconds timing this season, are leading the challenge.

There is no Yohan Blake, no Nesta Carter -- the leading Jamaican this season (9.78s) -- and even Michael Frater, who all are sub 10 sec runners this year.

In the men's 200m also, in the absence of Bolt, Powell and Blake who all are sub 20 sec runners, the responsibility of leading the Jamaicans has fallen to Lansford Spence, who has a season's best of 20.63sec.

Melbourne Games gold medallist Sherone Simpson's name is missing from the 200m squad, who clocked 22.65sec in July in Paris.

There was a major blow to the 4 x 400m team also after the withdrawal of two members -- Allodin Fothergill and Roxroy Cato.

The withdrawal leaves just six men in the mile relay pool, which includes former national senior 400m champion Lanceford Spence, who has been named to run both relays as well as the 200m, and 800m specialist Ricardo Cunningham.

There were a number of surprises in the team, including IAAF World Junior Championships 100m bronze medallist Remaldo Rose, who is coming off injury and ran sparingly this season.

400m hurdler Josef Robertson, who also ran sparingly with little success and former decathlon national record holder Claston Bernard, who has been out of the sport for several years, have also been included in the squad.

Jabari Ennis, who retuned to pole vault this year after several years away, was named in the team along with the US-based Christopher Smith. 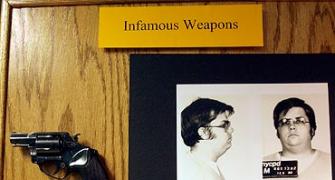 Caught on tape! What stars did before they became famous