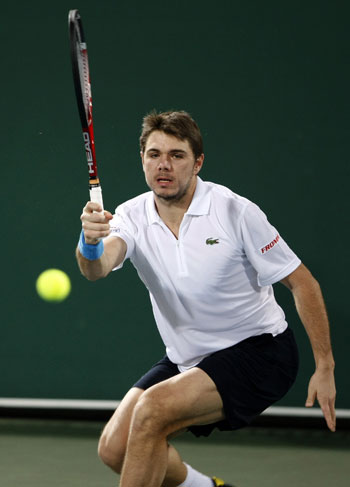 In a battle between two players who had vanquished Indian opponents en route to the showdown, third seeded Stanislas Wawrinka eased past American Michael Russell 6-3, 6-4 to advance to the quarter-finals of the Chennai Open on Thursday.

The Swiss used his backhand -- a shot described by the legendary John McEnroe as the best at present -- to a good effect to romp home in just 91 minutes and set up a meeting with seventh seed Michael Berrer of Germany, who beat Frenchman Stephane Robert 7-6 (7), 6-3.

The other aspect of Wawrinka's game that worked to his favour was his serve. The 24-year-old, didn't not allow Russell a single break point opportunity in the first set. He was broken only once in the second  a break which he recovered in the next game itself.

It was a clinical performance from the Swiss, who seeded second last year in his maiden appearance at the event, had crashed to an opening round defeat to unheralded Italian Flavio Cippola.

"To win in straight sets is a good result," admitted Wawrinka.

"I played a good game from the baseline," he added.

Wawrinka had comfortably beaten wild card Rohan Bopanna in his first match, while Russell had thrashed qualifier Prakash Amritraj in his opener.

On Thuesday, Russell exuded confidence to begin with but it was the third seed who drew first blood, getting himself as many as three break point opportunities in the sixth game.

He failed to convert any.

However, Wawrinka did have yet another opportunity, in Russell's next service game (the eighth of the match), as the American struggled.

A backhand winner gave the Swiss his fourth break point of the set and he duly converted it to go 5-3 up. In the next game, Wawrinka held comfortably to pocket the set.

The pair traded breaks early in the second set  Russell converting his first break point in the fourth only for Wawrinka to break to love in the next  but in the seventh the third seed secured what turned out to be the decisive break, courtesy a mis-hit from the American's racket.

Russell had two break points (at 15-40) in the eighth game but failed to make any count, and Wawrinka kept his cool to serve out the match two games later.

Meanwhile, three of the top four seeds, and five of the top eight, made it to the quarter-finals. The most notable omission from the last eight list was palpably the top seed Robin Soderling.

And the player who upset the Swede couldn't keep up his good work and progress further.

How many times have we noticed a player who causes an upset, getting upset in the next round. Robby Ginepri was no exception.

The American was beaten by the 82nd ranked Slovak Lukas Lacko in the day's first match.

"To win two matches at the start of the year is very satisfying," said Lacko in the post-match conference.

"In the first round (against Lu Yen-Hsun of Taipei), I relied more on a baseline game, but against Ginepri I served much better. I hope I continue to improve," he added.