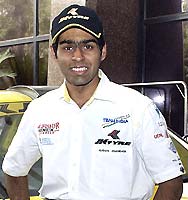 This triumph makes him India's most successful international Formula 3 driver (in terms of career wins) and also takes him back to the top of the championship points standings.

The T-Sport driver's weekend started solidly, if not spectacularly, during Friday's test session, when he ended the day second fastest -- two tenths off the fastest man, Ernesto Viso.

Karun seemed fairly confident after the day, "The car was working really well. Viso has done more testing here than us so to be only a couple tenths off is pretty good I think. I'm really looking forward to this weekend. The circuit is really interesting and is one I really enjoy."

Qualifying seemed to go all Chandhok's way. In the first session, he caused a surprise when on just his third lap out of the pits he did a time 1:29.45, which was to stand as the pole position time till the end of the session. In the second session, the temperature soared and the drivers were having to work a lot harder. Karun did a time of 1:29.93 seconds to go to the top spot with nine minutes of the session remaining. Championship rivals Viso and Kane tried as hard as they could to displace the 19-year-old from the top spot, but to no avail. Chandhok was happy with his day's work,

"Today the temperature went up significantly and it was important to do a time early on in the session. I got it all hooked up pretty well in the first one but was a little bit disappointed with the second because I felt we could've gone faster. Still I'm on pole, which shows that we're definitely the package to beat this weekend."

Viso and Kane qualified second and third respectively for the two races.

A huge crowd of over 35,000 people made for a fantastic atmosphere on Sunday morning as the cars took to the grid. At the start Viso and Chandhok went side by side into the first corner and banged wheels coming out. It was aggressive racing at its best, but the Venezuelan came out behind at the end of lap 1. Lap after lap the two young chargers fought wheel to wheel around the 3.9 kilometre circuit. After half distance though, Karun slowly started to edge away. As the race went on and the tyres got more and more worn, drivers started getting more concerned about finishing the race and things settled down a bit so that at the flag Chandhok won ahead of Viso, with Kane finishing a distant third.

With the track temperature creeping up to 40 degrees, the weather seemed more Indian than English at the start of Race 2. Chandhok made a much better start this time and managed to get two Championship class cars between himself and Viso. A crash on the starting line brought out the safety car on lap two. As the cars were getting ready for the re-start, Karun was passed by Viso.

He explains what happened: "We were rolling up to the line to get the re-start and somebody ahead slowed down unusually. There's a regulation saying you cannot pass before the start finish line so we all bunched up behind him and the next thing I saw was Viso flying past not only me but a whole bunch of other cars."

A frustrated Karun fought hard with Viso for a few laps till he got caught up with slower cars.

"There were a few championship class cars who were ahead of me but a lot slower and holding me up. This meant that I lost ground to Viso and had no chance to try and pass him back. All round it was not very pleasant out there and I decided to just stay on and finish in the points."

With Kane finishing only in fourth place in race two, Chandhok jumped ahead in the championship race.

Reflecting on his weekend's work, Karun said: "My engineer Alan Woodhead and I spent a lot of time before coming here, going through previous data and deciding on a set-up. I didn't change the car much all through the weekend, which is always a sign that a driver's comfortable. I can't really complain too much even with what all happened in the second race because at the end of the day I'm leaving here with two poles, a win and the championship lead. We've been on a bit of roll now with five wins from the last eight starts. Hopefully, we can keep the momentum going as we head into the final one/third of the championship."

Chandhok who is backed primarily by JK Tyres, in association with Kingfisher, Rolon, UCAL, Amaron and Parx has his next race at the super fast Thruxton circuit in two weeks' time.