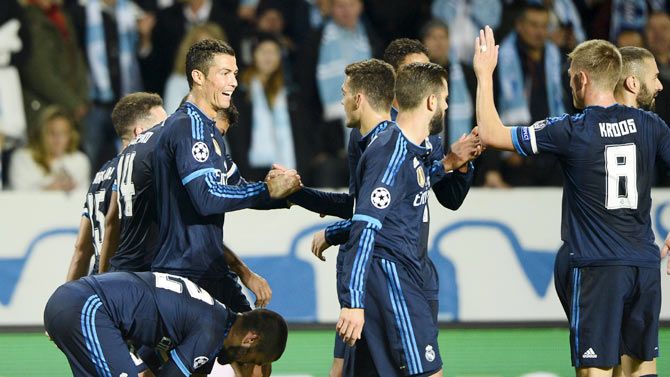 Cristiano Ronaldo equalled Raul as Real Madrid's all-time top scorer when he netted both goals in a 2-0 win at Swedish side Malmo in Champions League Group A on Wednesday.

- Champions League PIX: A special night of records and own-goals!

Mateo Kovacic and Isco combined to set up Ronaldo for the opener, his 500th career goal in 753 games for the club and country, in the 29th minute.

The Portugal captain ran clear onto an Isco pass and clipped a clinical shot past Johan Wiland in the Malmo goal.

His second came in the 90th minute after he was set up for a simple finish by substitute Lucas Vazquez.

The hosts had Yoshimar Yotun sent off before Ronaldo made sure of the win at the death, and equalled Raul's tally.

"What he has done in half as many matches as Raul is incredible," Real defender Alvaro Arbeloa told Spanish television. "Nobody thought he could achieve these records," he added.

"He is already a myth and a legend of Real Madrid."

He has won the last two FIFA Ballon d'Or awards for the world's best player, ending a four-year run enjoyed by his great rival Lionel Messi of Barcelona, having won his first in 2008.

Ronaldo is the top scorer in the Champions League with 82 goals five more than Messi on 77.

"Hopefully, he has no limits. I said he was unquestionable in the past and his merit is what he has done in far less time than the rest. That adds more value to what he has achieved," said Madrid coach Rafael Benitez.