Drag-flick specialist Sandeep Singh and striker S V Sunil scored two goals each as India dished out fast and entertaining hockey to beat South Africa 7-4 in the Champions Challenge in Johannesburg on Sunday.

India capitalised on every scoring opportunity to open a big lead after being level at 4-4 until the 55th minute in the Pool A league match.

Sandeep converted two penalty-corners, in the 14th and 35th minutes, while Saravanjit Singh (29th) and Tushar Khandekar (41st) scored a goal each.

Sunil, opening up the South African defence with his fine runs down the right flank, capitalised on a Khandekar pass in the 55th minute and then slammed a rising rebound on a 66th minute penalty-corner into the net.

Rupinder Pal Singh made no mistake with a 65th minute penalty stroke as India surprised the rival defence on several occasions and ran away with a well-deserved victory.

The victory gave India four points from two matches, the same as Belgium, who on Saturday drew 3-3 with India and beat Poland 7-3 on Sunday.

Belgium rode on Tom Boon's four-goal burst to emerge 7-3 victors over Poland in the Pool A match.

In Pool B action, Pan American champions Argentina rallied with two second-half goals to pull off a 3-2 victory over Canada while Malaysia scored a 69th minute goal to clinch a 2-2 draw with Japan. 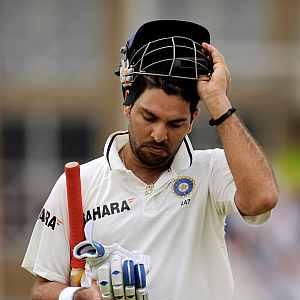 Never expected Anna to react the way he did: Digvijay Singh