IMAGE: Bayer 04 Leverkusen's Mitchell Weiser, center, celebrates with his team mates after scoring his team's third goal during the Bundesliga match against Wohninvest Weserstadion on May 18, 2020 in Bremen. Photograph: Stuart Franklin/Getty Images

Bayer Leverkusen stayed in the hunt for a top-four finish in the Budesliga after two goals by striker Kai Havertz as well as one each by Mitchell Weiser and Kerem Demirbay helped them to a 4-1 win at struggling Werder Bremen on Monday.

The result left Bayer fifth on 50 points from 26 games, one behind fourth-placed Leipzig and eight adrift of leaders Bayern Munich. Werder, who suffered a record-extending seventh straight home defeat, stayed 17th on 18 points from 25 matches.

With no spectators present in the stadium as part of the COVID-19 precautions, the game descended into a lull before a frantic five-minute spell produced three goals midway through the first half.

Havertz fired Leverkusen ahead in the 28th minute when he rose above his marker at the far post and headed past keeper Jiri Pavlenka after a darting run and cross by Moussa Diaby. 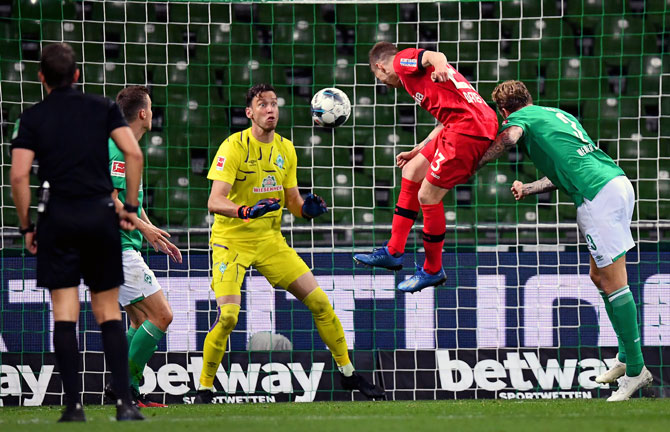 Theodor Gebre Selassie levelled two minutes later with a cheeky back-heel from six metres after Leonardo Bittencourt swung in a corner, but more slack defending by Bremen allowed the visitors to nose ahead again in the 33rd minute.

Havertz was left completely unmarked to head home from eight metres after Kerem Demirbay floated in an inch-perfect free kick and Bremen fell apart in the second half as the visitors carved them open almost at will.

Defender Weiser made it 3-1 in the 61st minute when he powered in a close-range header after another fine assist by the lively Diaby and Leverkusen missed several chances before Demirbay sealed the rout.

Substitute Karim Bellarabi waltzed his way through a static home defence before he released Demirbay with a clever pass which left the latter with a simple task of beating Pavlenka with a dinked finish.

© Copyright 2020 Reuters Limited. All rights reserved. Republication or redistribution of Reuters content, including by framing or similar means, is expressly prohibited without the prior written consent of Reuters. Reuters shall not be liable for any errors or delays in the content, or for any actions taken in reliance thereon.
Related News: Bayer Leverkusen, Mitchell Weiser, Bremen, Werder, Kai Havertz
SHARE THIS STORYCOMMENT
Print this article How EPL plans to make up for fans in empty stadiums