Brazil held 10 presumed Islamist militants in isolation cells at a maximum security jail on Friday as police combed their computers and mobile phones for information about possible threats to next month's Olympics in Rio de Janeiro.

Brazil's Justice Minister Alexandre Moraes said after the arrests on Thursday that the men formed a disorganized group of "amateurs" who contacted each other via social media and had little clue of how to become terrorists.

His statements, however, did not go down well at ABIN, Brazil's intelligence agency, or the Federal Police, where sources told Reuters the minister had underplayed the terrorist threat by portraying the group as a bunch of crazy young men.

"He gave the impression that this is a minor problem, that does not represent a risk," said one Federal Police source. "That's not right. We cannot spread that idea."

Security officials and experts said that such groups, even if inchoate or disorganized, reflect the growing efforts by Islamic State (IS) and other radical organizations to attract would-be militants through social media and Internet platforms.

"There is something qualitatively different about terrorist organizations and their dynamics today because they are more diffuse and widely distributed and may materialize where you don't expect them," says Robert Muggah, research director at the Igarapé Institute, a security and development think tank in Rio de Janeiro.

US intelligence officials said on Friday they have no evidence that the men arrested in Brazil, at least some of whom had allegedly pledged allegiance to IS, were actually part of or directed by the militant group.
Like Brazilian officials, they say they have no reliable evidence of plans for any specific attack on the Olympics, which start Aug. 5.

But recent attacks in Europe have raised fears of a "lone wolf" sympathetic to IS attacking athletes or visitors to the Games, especially from countries targeted by the group, such as the United States, Britain, France and Israel, officials said.

"Amateurs or not, they were organising themselves," said Paulo Storani, a former captain of an elite squad in Rio de Janeiro's police. "This is the way the Islamic State recruits people."

Federal Police sources said they had been monitoring some members of the group for around a year after they accessed militant Islamist web sites.

Police decided to arrest the men, who gave themselves Arabic names in exchanges over WhatsApp and Telegram message apps, when they started discussing weapons training and one tried to buy an AK-47 assault rifle online from a Paraguayan gun shop.

Authorities said only two of the men, all Brazilians between the ages of 20 and 40, had actually met each other, when they went to learn Arabic in Egypt in 2012 after converting to Islam.

Local media published photographs of the two men in Cairo holding what appeared to be a black-and-white IS banner. The rest had no direct contact with the group, though police told the Folha de S. Paulo newspaper that four had pledged allegiance to IS leader Abu Bakr al-Baghdadi online.

The judge who issued the arrest warrants, Marcos Josegrei da Silva, said they were warranted under a new anti-terrorism law enacted this year that provides for prison sentences of up to eight years for belonging to a terrorist group or for planning an act of terrorism.

The men can be held for 60 days without charges.

An eleventh suspect sought by police turned himself in on Friday afternoon in Mato Grosso state and will be taken to the same prison, federal police said in a statement, without naming the detainee.

Thursday's arrests renewed fears that militants might find fertile ground for sympathizers in Brazil, a diverse population of more than 200 million people.

The country's large Arab community, while mainly Christian, has long been the subject of speculation over suspected ties to militant groups, but no proof of such a relationship has ever been discovered by Brazilian or foreign intelligence officials.

Another source of concern is that southern Brazil, where some of the Arab community settled, is an area where weapons are one of many contraband products frequently smuggled across porous borders with Paraguay and Argentina.

The wife of one of the men photographed in Cairo said her husband, Vitor Magalhaes, 23, used social media to teach Arabic after he won a scholarship to Egypt. She denied he was involved in terrorism.

"He became a 100 percent better person when he converted to Islam. He is a loving father, a good person who wants to help everyone," Larissa Rodrigues told Globo TV at her home in the Sao Paulo district of Guarulhos.

Magalhaes only mentioned Islamic State at home when it appeared on the news and was "all about work", she said.

The other man in the Cairo photo, Antonio Andrade dos Santos, 34, openly supported Islamic State after his conversion. But he had been expelled from a local Muslim prayer centre in the northern city of Joao Pessoa, because of his extreme views, the Estado de S.Paulo newspaper reported.

© Copyright 2021 Reuters Limited. All rights reserved. Republication or redistribution of Reuters content, including by framing or similar means, is expressly prohibited without the prior written consent of Reuters. Reuters shall not be liable for any errors or delays in the content, or for any actions taken in reliance thereon.
Related News: Islamic State, Federal Police, Brazil, Rio de Janeiro, Paulo Storani
SHARE THIS STORYCOMMENT
Print this article 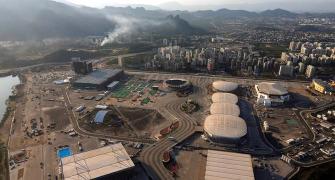 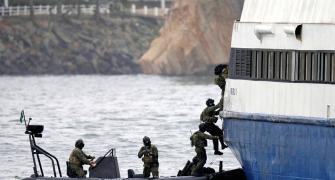 How Brazil is planning to guard the Olympics against terror attacks