Usain Bolt returned to the scene of his triple Olympic glory and duly delivered for 60,000 camera-flashing fans as he overcame a slow start to win the 100 metres and give the London Anniversary Games the Friday finale it demanded.

Ukrainian high jumper Bohdan Bondarenko did briefly threaten to steal the Diamond League show when he went close to beating Javier Sotomayor's 20-year-old world record but when he brushed the bar, all eyes quickly turned back to London's favourite Jamaican.

Once he got into his running he came through comfortably in 9.85 seconds, his fastest of a somewhat ragged season, as he edges towards top form ahead of next month's World championships in Moscow.

American Michael Rodgers was second in 9.98 with Jamaican Nesta Carter third in 9.99. 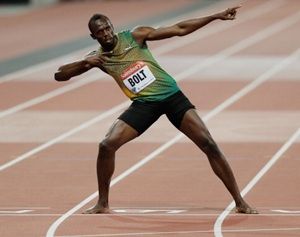 A year ago Bolt completed a second successive Olympic sprint clean sweep and, tempted back by the British Government's easing of his potential tax burden, capped off a night dripping with nostalgia for those two astonishing weeks in 2012.

The entertainment began with a video montage of some of the highlights from what is generally agreed to have been an unparalleled Olympic athletics programme.

It was a dose of feel-good factor much-needed in the wake of the recent doping positives that have robbed Moscow of two of the main 100m contenders Tyson Gay and Asafa Powell.

And while Bolt was never likely to get close to his 2012 winning time of 9.63 two weeks ahead of his attempt to regain the world title he lost after his 2011 false start, he looked to have plenty in the tank.

"My start was poor and I need to work on that," he said. "To make a perfect race I need to make a good start and just get in to the race.

"But I'm so excited to be here in London again. The crowd gives you so much energy. It's wonderful, I love this, it's what makes me run fast it's a brilliant experience to be here again."

The only man who looks remotely capable of preventing Bolt taking a third successive 200m world title next month is compatriot Warren Weir and the 23-year-old continued his sharp 2013 form with a 19.89 victory over another Jamaican, Jason Young.

Weir's season's best of 19.79, also his personal best, is just behind Bolt's 19.72 but the half-lap is the main man's favourite event and such is his aura that the 2012 Olympic bronze medallist will need to find some remarkable inner confidence to prevail.

"It's a great stadium and the crowd are amazing," he said. "I'm pretty pleased with 19.89, it's a very fast time going to Russia. I'm confident going into the world champs that I can run my race and win."

Such was the excitement surrounding Bolt, David Rudisha's world record 800m win and Mo Farah's distance double a year ago that Kirani James's remarkable performance to win the 400m as a 19-year-old was somewhat overlooked.

However, the Grenadian is on course to retain his 400m world title as he reprised his Olympic-winning run with a dominant display.

American Tony McQuay went out hard and pressured him coming into the home straight but the smooth-striding youngster found another gear to pull clear and win in 44.65

"They were sneaking up on me a little bit on the home straight but I just tried to stay relaxed and just finish strong," he said.

"It brought back a lot of fond memories and just being here is great. I'm definitely confident in my abilities and what I can do ahead of Moscow."

Bondarenko took the high jump with 2.38 metres and then took two attempts at 2.47 - two cm higher than Sotomayor's 1993 mark and a full six cm higher than his own best.

"I feel confident I will get it in Moscow," he said.

Cuba's Yarisley Silva won the pole vault with 4.83, gaining a measure of revenge on second-placed American Jenn Suhr, who piped her to Olympic gold on countback last year.

In the women's 400m hurdles Olympic bronze medallist Zuzana Hejnova made it eight wins out of eight this season as the Czech overhauled home hope Perri Shakes-Drayton with a season-leading 53.07 seconds.

The action continues on Saturday when Farah, whose astonishing 10,000 and 5,000m runs last year raised the roof, goes over 3,000m.

Bolt will also be back on track in the 4x100m relay while the there could be an explosive 110 metres hurdles with a lineup dripping with quality.

Image: Usain Bolt of Jamaica celebrates after crossing the line first in the men's 100m A race on Day 1 of the Sainsbury's Anniversary Games - IAAF Diamond League 2013 at The Queen Elizabeth Olympic Park.

© Copyright 2022 Reuters Limited. All rights reserved. Republication or redistribution of Reuters content, including by framing or similar means, is expressly prohibited without the prior written consent of Reuters. Reuters shall not be liable for any errors or delays in the content, or for any actions taken in reliance thereon.
Related News: Jamaican Nesta Carter, Bolt, London, Jason Young, Moscow
COMMENT
Print this article