Czech Tomas Berdych snapped a run of 11 consecutive defeats by world number one Novak Djokovic to reach the semi-finals of the Rome Masters before Rafael Nadal was stretched to the limit against David Ferrer on Friday.

Berdych clawed his way back from a 6-2, 5-2 deficit to stun the Serbian top seed 2-6, 7-5, 6-4 and set up a semi-final meeting with Nadal, who for the second week running outlasted compatriot Ferrer in a fierce claycourt scrap.

Nadal won 6-4, 4-6, 6-2 for his ninth consecutive victory over Ferrer, who hit the Mallorcan with every weapon in his locker but still came up short as he did in Madrid last week.

"It was an extremely tough match, David always takes you to the limit," Nadal, looking for his sixth title in eight tournaments since returning from injury, told reporters. 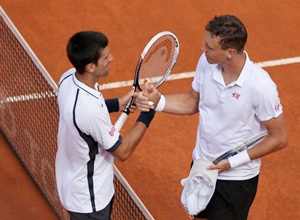 "I am extremely happy. I think I made a huge effort both in the second set when I was 4-0 down and in the third to get past a fantastic opponent."

After easing through the first set, Federer survived a scare when he was broken in the opening game of the second, but after clawing his way back to 5-5, he took the tiebreak for the loss of just two points.

In the women's event top world number Serena Williams pulverised Spaniard Carla Suarez Navarro 6-2, 6-0 to reach the last four but there will be no re-run of last week's Madrid final after Maria Sharapova was forced to withdraw from her quarter-final against Sara Errani because of illness.

Berdych had not tasted victory over Djokovic since the 2010 Wimbledon semi-finals and was on the brink of a 12th straight loss to the Serbian before an amazing transformation.

The clean-hitting world number six won five games in a row to level the match and then dominated the deciding set to leave Djokovic with food for thought before the French Open.

"It's a special victory. I was on 11 defeats in a row (against Djokovic) and it had to stop," Berdych, who did not even create a break point until the top seed served for the match at 5-3 in the second set, told reporters.

Djokovic, who also lost early in the Madrid Open last week, said he had let Berdych back into the match.

"It was a very weird match," he told reporters. "I lost concentration and I started to play too defensively and did not convert my opportunities and I lost this match on my own.

"I need to make sure that I don't have highs and lows. I'm sure that I will be ready for Paris."

Fifteen-times grand slam champion Williams is enjoying the longest winning streak of her illustrious career, her rout of Suarez-Navarro stretching her run to 22.

"I guess this is the best period in my career but I don't really think about it," the American said.

Next in her sights is Romanian qualifier Simona Halep who beat twice former champion Jelena Jankovic 4-6, 6-0, 7-5.

Image: Tomas Berdych of the Czech Republic shakes hands at the net with Novak Djokovic of Serbia after his three-set victory.

© Copyright 2022 Reuters Limited. All rights reserved. Republication or redistribution of Reuters content, including by framing or similar means, is expressly prohibited without the prior written consent of Reuters. Reuters shall not be liable for any errors or delays in the content, or for any actions taken in reliance thereon.
Related News: Tomas Berdych, Novak Djokovic, Rafael Nadal, David Ferrer, Roger Federer
COMMENT
Print this article 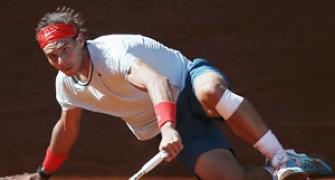 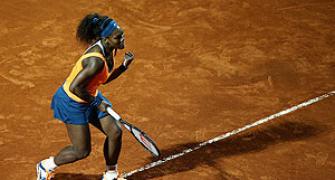 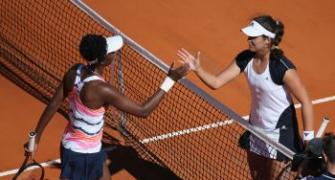 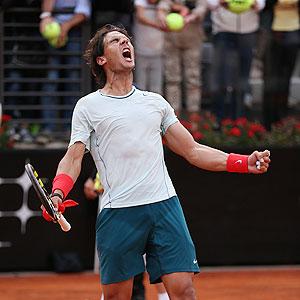 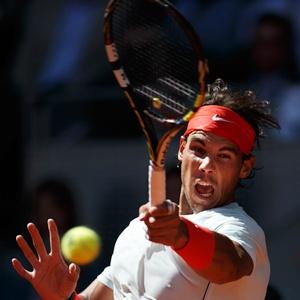