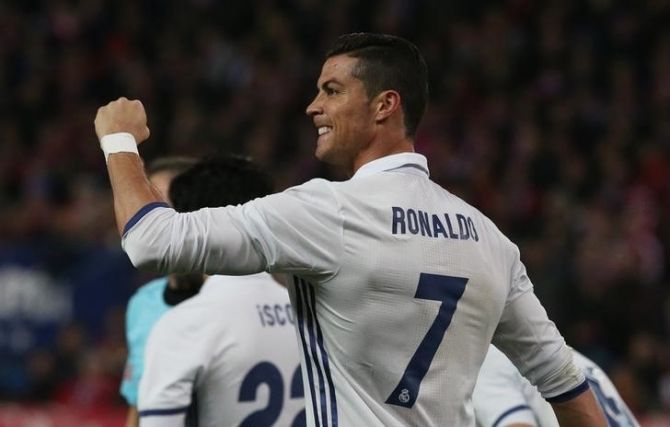 Cristiano Ronaldo ensured Atletico Madrid fans will have bitter memories of the last local derby at the Vicente Calderon stadium by scoring a hat-trick in a 3-0 win for La Liga leaders Real Madrid on Saturday.

Ronaldo's deflected free kick put Real in charge in the 23rd minute in the first meeting of the teams since the Champions League final in May.

The prolific Portuguese killed off Atletico's resistance by winning and converting a penalty in the 71st minute and capped a harrowing night for the home side by tapping in the third in the 77th.

It was Real's first league win over their city rivals since 2013 while Ronaldo's treble took him to the top of the league's scoring list on eight goals along with Barcelona pair Lionel Messi and Luis Suarez.

Real are top of the table with 30 points from 12 matches, four above Barcelona after the champions were held to a goalless draw at home to Malaga who finished the game with nine men.

Atletico are nine points adrift of Real in fifth while Sevilla are third on 24 after beating Deportivo La Coruna 3-2.

The Madrid derby took on extra significance for being the last league meeting of the sides at the Vicente Calderon with Atletico due to move from the 50-year-old ground to a new 67,000 capacity arena next year.

"It's a very important victory for us at a difficult ground. We played very well from the start and there's not many teams that can do that at this ground," said Real coach Zinedine Zidane.

"I'm delighted with Cristiano's goals and (midfielder) Isco was incredible, he didn't give the ball away once."

Real were without midfield duo Casemiro and Toni Kroos and Zidane decided to rest Sergio Ramos and Karim Benzema, who had only just recovered from injury.

After a frantic end-to-end start, the visitors took control and came close to taking the lead when Ronaldo headed towards goal and Jan Oblak dived low to hook the ball off the line.

Real's all-time top scorer told the referee's assistant the ball had gone over the line but he did not have to wait much longer to celebrate a legitimate goal.

He whipped a free kick at the wall and saw it deflected off Stefan Savic's hip beyond Oblak.

Just like the Champions League final, Atletico made a better start to the second half and set about trying to get a foothold in the game.

Antoine Griezmann burst into the box from the left but could only fire the ball out for a throw from a tight angle while Yannick Carrasco came close with a long-range strike.

Atletico coach Diego Simeone threw caution to the wind by bringing on forwards Kevin Gameiro and Angel Correa for Fernando Torres and Gabi but Ronaldo took advantage of the extra space at the back, racing behind Savic and tumbling over the defender's stray leg.

Ronaldo sealed Real's 11th European Cup triumph with a penalty against Oblak and made no mistake from the spot here, sending the Slovenian the wrong way.

He then stuck the knife into Atletico by turning in Gareth Bale's low cross to complete his treble.

Atletico midfielder Koke felt the scoreline was harsh on his side.

"It's been a difficult night. We leave here very sad, I don't think we deserved to lose 3-0," he said. 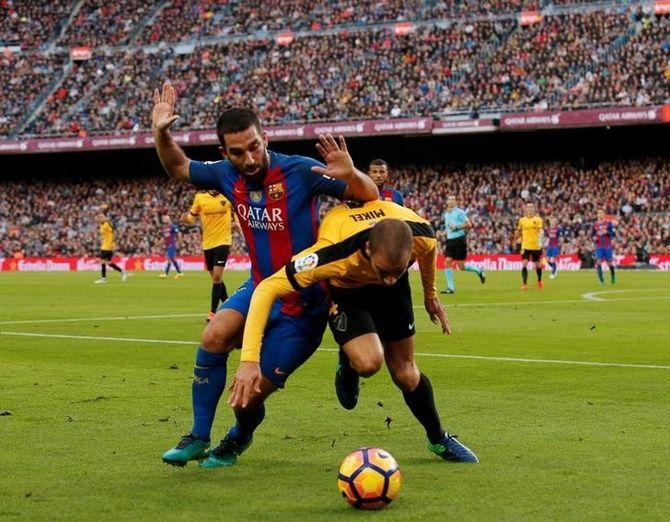 Barcelona dearly missed Lionel Messi and Luis Suarez as the La Liga champions were held to a goalless draw at home to nine-man Malaga on Saturday, missing the chance to go top of the standings.

Messi was taken ill before the game while Suarez, joint-top scorer in La Liga along with the Argentine, was suspended. Captain Andres Iniesta was also injured and Luis Enrique's side were incapable of prising open a Malaga side happy to sit back and soak up pressure for the majority of the game.

Despite dominating possession Barca struggled to carve out many opportunities and on the rare occasion they created a chance, Malaga goalkeeper Carlos Kameni was there to frustrate them, clawing away efforts from Gerard Pique in either half and producing a sensational save to deny Neymar in injury time.

Malaga had defender Diego Llorente dismissed in the 69th minute for a straight red card following a lunge on Neymar, but Barca still could not find a way through, although Pique had what looked a clear penalty appeal turned down after his shirt was tugged in the area by Mikel Villanueva.

Malaga have proved difficult opponents for Barca recently at the Nou Camp, beating Luis Enrique's side 1-0 in February 2015 and only losing 1-0 last season.

They frustrated the Catalans again by employing a conservative 5-4-1 formation and defending deep for most of the game, although they created one clear-cut chance, midfielder Juankar firing wide of the near post after rounding Marc-Andre ter Stegen.

Malaga's Juankar was shown a straight red card in stoppage time for dissent.

Earlier on Saturday, Gabriel Mercado scored a controversial stoppage-time winner as Sevilla produced a sensational late turnaround to come from two goals down to win 3-2 at Deportivo La Coruna and provisionally go third.

Deportivo were denied a penalty late in the second half while leading 2-1 when Argentina international Mercado pushed Florin Andone over in the area.

Mercado escaped a possible red card and netted from close range in the 92nd minute after Vitolo had levelled in the 87th minute.

© Copyright 2021 Reuters Limited. All rights reserved. Republication or redistribution of Reuters content, including by framing or similar means, is expressly prohibited without the prior written consent of Reuters. Reuters shall not be liable for any errors or delays in the content, or for any actions taken in reliance thereon.
Related News: Malaga, Barca, Barcelona, Neymar, Luis Enrique
SHARE THIS STORYCOMMENT
Print this article