A young Indian side put up a spirited fight before going down 3-4 to six-time champions Australia in the opening encounter of the Sultan Azlan Shah Hockey tournament in Ipoh on Saturday.

India, who have fielded a second string side did challenge their superior opponents but conceding two goals within two minutes of the second half became the turning point of the game.

For Australia, Matt Gohdes scored in 24th and 39th minute while Glenn Simpson (39th minute) and Trent Milton (53rd) were the other scorers. 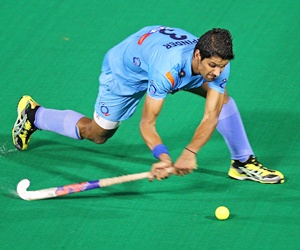 Drag-flicker Rupinder Pal Singh converted both the penalty corners in the 40th and 68th minute while Malak Singh scored a brilliant field goal from an acute angle in the 51st minute.

The winners lead 1-0 at the break.

The Aussies started with a bang in the second half as they got two goals within two minutes. First it was a penalty corner, which Glenn Simpson converted with the Indian defence being sold a dummy by one of the Australian players standing in the opposition striking circle.

Before the Indians could get their acts together, it became 3-0 as Gohdesh got his second goal in the 39th minute.

In the 41st minute, India managed to get their first short corner which Rupinder Pal converted. His drag flick was a powerful one which didn't give the Aussie defence a chance.

Having pulled a goal back, the Indian team came out of their shell with the likes of Mandeep Singh and Chingalsena trying to take control of the midfield.

In the 51st minute, talented Malak scored the best out of the seven goals in the match. Receiving a pass from the top of the 'D', the player raced down the right wing and from an acute angle beat the Aussie goalkeeper, who had closed in on the near post.

With scoreline reading 2-3, one expected Michael Nobbs' boys to go all-out for the elusive equaliser but the Australians used all their experience to increase their lead against the run of play day.

For once, Sreejesh was not at his best as he committed early on the drive. It was Trent Milton, who was standing near the goalmouth chipped it over the diving goal-keeper to make it 4-2. The match was into its 53rd minute at that point of time.

Finally, when Rupinder Pal got his second and team's third goal, it was too late in the day and the Australians managed to hold on to their slender lead and logged home three points.

In an earlier match in the day, Pakistan edged out New Zealand 4-3.

India's chief coach Michael Nobbs said he had enough reasons to be pleased with the performance of his wards.

"Australia's two goals early in the second half unsettled us. But I am happy with the way the boys fought back and managed to narrow the gap," Nobbs said.

"We brought a development squad here and I am satisfied with the performance of the team against Australia today."

India's captain in this tournament, Danish Mujtaba endorsed the view of his coach and said they have learnt valuable lessons from today's performance against Australia.

"A few areas the team has to work upon. But Rupinder was terrific with penalty corner conversions today," he said. 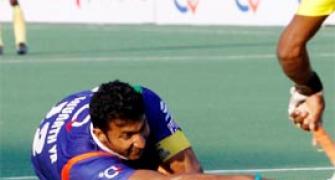 HIL: UP Wizards beat Mumbai 2-0, close in on semis